“What a player; now he is back!” – Guardiola praises Bernardo Silva after City win 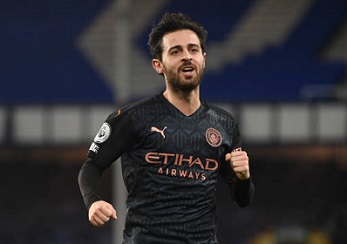 Bernardo Silva gave more indication he is getting back to his best with a Man of the Match performance in Manchester City’s 3-1 win over Everton at Goodison Park.

The Portugal midfielder scored one and registered an assist on Wednesday evening as the Premier League leaders extended their advantage at the top of the table to ten points with yet another victory.

City have now won eleven league matches in a row, and Bernardo’s influence in overcoming Everton in the second half was crucial to the result. The teams were level at 1-1 on the hour, with Richarlison cancelling out Phil Foden’s opener for City, but the game swung back in the visitors’ favour when Bernardo fed Riyad Mahrez to finish brilliantly from the edge of the area.

Bernardo put the game beyond the Toffees’ reach in the 77th minute with a pinpoint finish on his favoured left foot for his second league goal of the season. Having endured a difficult 2020, Bernardo’s return to form has been a major boost for City and manager Pep Guardiola was quick to eulogise the former Benfica man at full time.

“What a player is all I can say,” Guardiola said when asked about the Seleção man. “Everything he does, he does incredibly well. The year we won a second Premier League title in a row, he was unstoppable and now he is back.

“He is a lovely person and as a manager you love to have players like Bernardo. His mum and dad will be so proud.”

João Cancelo and Rúben Dias, both of whom have enjoyed excellent seasons in England, joined Bernardo in playing the full ninety minutes. City travel to Arsenal at the weekend, before their Champions League last-16 first leg with Borussia Monchengladbach.