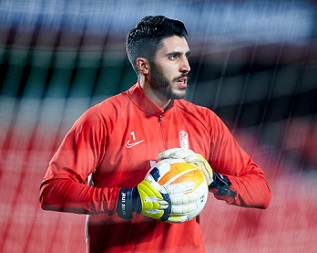 Rui Silva is widely expected to leave Spanish outfit Granada in the summer, with the Portuguese goalkeeper in high demand as he nears the expiration of his contract.

Silva has become one of the most reliable shot-stoppers in La Liga across the last two seasons, having helped Granada to their first-ever qualification for Europe last term. This season the former Nacional man has only missed one game for the Andalusians, who are 9th in the Spanish league and recently beat Napoli 2-0 in their Europa League first-leg tie.

However, it will be Silva’s fifth and final campaign with the club, as Granada sporting director Fran Sánchez confirmed the player’s decision to leave on a free. “We tried until the last, but his agent told us he won't renew,” Sánchez said. “We couldn't compete. He's been extraordinary. We'll enjoy his presence until the end.”

Real Betis are tipped to win the race for Silva’s signature on a five-year contract, while there has also been interest from Italy and England. Speaking to Eleven Sports, Silva admits that the recent discussion over his future can be difficult to ignore, but insists he is keen to keep a consistent performance level for the remainder of the season.

“It is very difficult,” he said. “The truth is that, every week, there was news about me. We players also read the news. In my case, I try to abstract myself a little, but it is often difficult because if it is not me reading, someone sends me the news and obviously there is always that extra pressure.

“I always try to stay focused and when I go out on the pitch, I go to do my best. I’m representing an excellent club, which gave me everything and that's what I have to respect until the last day of the contract. That’s what I will do.

“I turned 27 years old a few days ago and I am at a crucial age in my career. The important thing is to continue what I have been doing. I want to continue to be important in a club. I want to play or at least fight for it because I know nobody is guaranteed to start. I want, at least, to be given the opportunity to play and not to go to a club where I know I won’t play. I need consistency and my next move is with this in mind.”

Silva also spoke about his biggest reference point in his position, and chose Barcelona and Germany goalkeeper Marc-André ter Stegen as the best around. “I love Ter Stegen. For me, he is the best in the world. He is the most complete goalkeeper and I love complete goalkeepers. In his case, there are things that are not normal: the way he finds the midfielders with the ball or the ease of playing with both feet. I really appreciate his characteristics.”