Valencia match-winner Guedes explains celebration: “I was telling my friends to shut up, they say I don’t score” 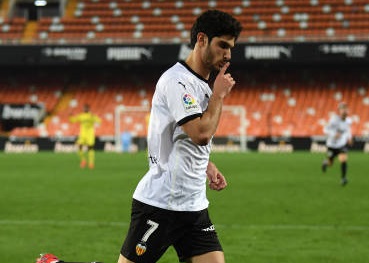 Gonçalo Guedes scored a last-gasp winner in the Valencian derby on Friday evening, and his subsequent ‘shush’ celebration left many wondering who was target of his gesture.

Valencia came from behind to beat Villarreal 2-1 at the Mestalla, with Guedes completing the fightback with a brilliant left-footed finish in stoppage time. Curiously, the Portugal winger’s only other goal this season also came against Villarreal as Los Ches lost the reverse fixture 2-1 in October.

After his winner Guedes put his finger to his lips in what appeared a defiant celebration, and the former Benfica man was asked about the celebration during his post-match interview. “It was for my friends and I told them to shut up because they are always telling me that I don't score and I don't play well,” teased Guedes.

“[The goal] is going to give me confidence. Whether I play or not is the coach's decision and I respect him. This victory will give us confidence. From the beginning we played a good game.

"I want to do what is best for the team. My idea is to always be in form, better than last year or the previous one. What happens outside does not interest me much and I pay attention to my family, my friends and the coach.”

Great to see Guedes scoring again. Let's make it 5 comments here so the authors would know we care about the performance of Guedes as well :D.

It looks like you have been drinking more now that Benfica is down. Here is a hotline number you can call for help. 1-SPO-RTI-NG!!

Lol one good year in 25 years and all of sudden gloating LOL Enjoy but take it easy. Benfica will be back next year

Just writing to say I care about the performances of Guedes, a player who has been a national team player and has fallen out of form is always interesting. Especially given his celebration, it was nice to get the deeper story including the...

Just writing to say I care about the performances of Guedes, a player who has been a national team player and has fallen out of form is always interesting. Especially given his celebration, it was nice to get the deeper story including the thoughts of Guedes.

I think some people miss the deeper side of why these articles are published which is more than the goal scored, it is about the player reaction and perspective. I like the personal and in depth coverage of the players.

Portugoal.Net team, long time reader back to the mid 2000s era, you have my support keep up the good work. I do like to get the player's thoughts and perspective.

Read More
Tony
There are no comments posted here yet