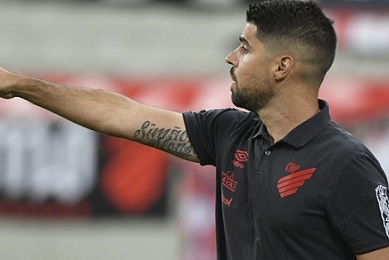 Brazilian football has hired yet another Portuguese to manage in the country’s top flight, Brasileirão, with 38-year-old António Oliveira recently promoted to head coach at Athletico Paranaense.

The position marks the first senior managerial role in Oliveira’s career, which largely began working under his father – Benfica legend Toni – and has so far taken him from Portugal to Iran, Slovenia, Kuwait and now a Brazilian football culture increasingly favouring Luso coaches.

Oliveira was born in 1982, the year after his father ended his 13-year spell as midfielder for Benfica, during which he was named Portuguese Footballer of the Year and won eight national championships. Inevitably, Oliveira – known also as Toni - set about forging his own career in football and joined Benfica’s academy aged eight.

Although graduating from the youth ranks at Estádio da Luz, Oliveira’s football journey dwindled after leaving Lisbon for Sporting Braga, before he ultimately hung up his boots at just 29 having taken in spells at Santa Clara and Casa Pia. Oliveira quickly turned his attention to coaching and undertook an internship with Benfica’s U17s before teaming up with his father on a first foreign venture. 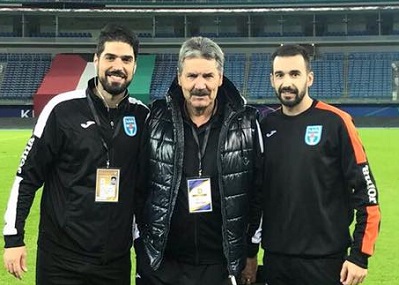 “I don’t live on records”

Toni Snr appointed his son as assistant manager when in charge of Tractor Sazi in 2014, where they lifted the Iranian Cup, after which Oliveira took a similar role with Slovenians Rudar Velenje in early 2017. When Toni took charge of Kuwaiti side Kazma later that year, Oliveira joined his father once more and the pair spent two years in Kuwait City, winning the Federation Cup in 2018 and notably losing just one match in a 10-month period.

“I started my career with [Toni] in 2012 almost anonymously,” Oliveira told Sport TV in 2019. “And over the years I started to build trust in my work, my competence. It was like that over the years, also with achievements in the last two years. But I don’t live on records. I live by my work and then successes are the crowning achievement.”

The job at Kazma proved the final one of Toni’s career, leaving his ambitious son to further his own aspirations with a fantastic opportunity in Brazilian football. In the aftermath of Jorge Jesus’ success with Flamengo in 2019, Portuguese coaches became highly sought-after and when Jesualdo Ferreira landed at Santos in January 2020 he asked Oliveira to work as assistant and coach of the club’s B team. 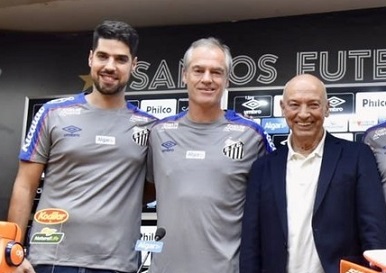 Oliveira left the Sao Paulo club when Jesualdo was sacked after half a year in charge, but a new opportunity quickly arose in Brazil later in 2020. Athletico Paranaense, who were to finish mid-table in Serie A, gave him a job on their staff as no2 to vastly experienced manager Paulo Autuori, who was planning a move into a technical director role.

Oliveira’s promotion to head coach was announced over the weekend by Autuori, who coached Vitória Guimarães (three times), Nacional and Marítimo in Portugal, and is now leading the club’s strategy off the field. In what appears a well-considered move, Oliveira will also work closely with director William Thomas, who was a colleague at Santos.

Athletico’s plans for the upcoming 2021 season are somewhat uncertain as the club is attempting to overturn a transfer ban imposed last summer. Incoming transfers are dependant on the outcome of their appeal against he ban, expected to be heard in the coming days, as Athletico look to strengthen the squad following the departure of players such as former Porto man Lucho Gonzalez, who retired at the age of 40.

Oliveira’s first match in charge is scheduled for April 1st when Athletico host Coritiba in the Paranaense State Championship. The team will then prepare for the Brasileirão Série A and Copa do Brasil, while last season’s 9th-place finish means participation in the Copa Sudamericana.