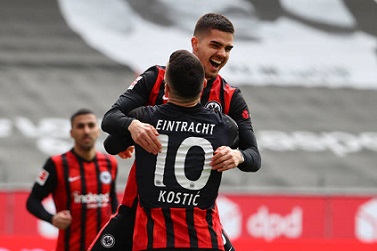 André Silva was the undisputed star performer from the Portuguese abroad contingent yet again this weekend, scoring twice and getting an assist for Eintracht Frankfurt in the Bundesliga. As well as helping his side to three points against Union Berlin, Silva also moved closer in his pursuit of the club’s all-time season goalscoring record.

Elsewhere, Portugal midfielder Danilo Pereira scored an important goal in Ligue 1 for Paris Saint-Germain in their impressive victory at Lyon, which saw the champions go top of the table after Lille were beaten by Nimes despite Xeka’s goal. Nélson Oliveira, Edgar Ié and former Benfica starlet Zé Gomes were among the other Luso goal-getters across the continent.

André Silva’s double for Frankfurt in their 5-2 win over Union Berlin on Saturday afternoon helped his side get back to winning ways after three Bundesliga games without a victory. In a remarkable first half with six goals, the former Porto man put his team ahead after just two minutes from close range and got his second with a cool first-time finish shortly before the break. Silva also set up Filip Kostic for the home side’s third goal.

The brace moves Silva onto 21 Bundesliga goals from just 24 matches, making it by far his best ever goalscoring season having previously scored 16 for Porto in 2016-17. The 25-year-old is also on course to challenge Frankfurt’s all-time club record for most goals in a league season, which is held by Bernd Hölzenbein with 26 in the 1976-77 campaign. 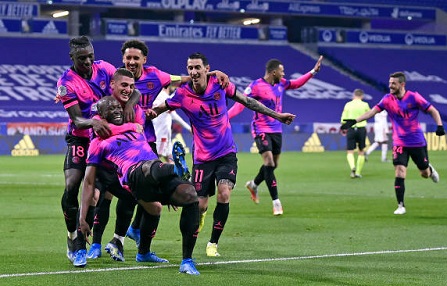 Portuguese midfielders were among the goals for both of Ligue 1’s top two this weekend as champions Paris Saint-Germain leapfrogged Lille to go top. PSG ran out impressive 4-2 winners at Lyon in Sunday night’s big clash, while Lille surprisingly lost 2-1 at home to Nimes earlier in the day.

Seleção midfielder Danilo Pereira scored PSG’s second to put them 2-0 up with a sharp finish just after the half hour mark with what was his second goal of the season. The visitors went into a four-goal lead before Lyon pulled a couple of goals back late on, and the victory means PSG go top of the table on goal difference.

Lille’s slip-up against relegation battlers Nimes earlier in the day was the surprise result of the day, making it just one win from four league matches for Christophe Galtier’s side. Xeka, who was joined in the starting line-up by José Fonte, scored an equaliser with a header in the first half, but Renaud Ripart’s winner consigned Lille to defeat. In better news, Renato Sanches was introduced as a second-half substitute after a recent minor foot injury.

The rest: Oliveira, Ié and Gomes on the scoresheet

Former Benfica prospect Zé Gomes is enjoying some good form in Bulgaria with his new club Cherno More - his well-taken equaliser in Saturday’s 1-1 draw at Montana was his second since arriving in the country last month. In Turkey, former Sporting defender Edgar Ié scored for Trabzonspor as they tightened their grip on 4th place with a 4-1 win over Ankaragucu in the Super Lig.

Nélson Oliveira scored for AEK in the big clash with PAOK in Greece, but his goal meant little as the club from the capital were beaten 3-1 in Thessaloniki. Finally, Samú Costa scored for Jose Gomes’ Almeria in their 2-1 defeat at Ponferradina in the Spanish Segunda Division, while there were also goals in victories for Diogo Pimentel for Fola Esch in Luxembourg and Paulo Mendes for Welsh outfit Caernarfon Town.