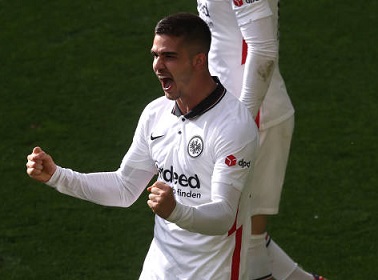 André Silva scored a dramatic late winner to give Eintracht Frankfurt victory at Borussia Dortmund and give a huge boost to his side’s hopes of securing Champions League football.

The Seleção striker struck in the 87th minute to settle the match, while also edging closer to contesting Frankfurt’s all-time club record for most goals scored in a Bundesliga season.

Silva found space at the back post to head in an excellent cross from Filip Kostic for his 22nd league goal of the season from just 25 appearances. Speaking after the match, the former Porto man was clearly delighted to have made the difference for his side once more in what is proving by far the most prolific season of his career.

“It feels so good scoring the goal for the victory in the last minutes,” Silva told reporters after the final whistle. “I just finished off the work of the team. The whole team is giving everything and I try my best too. I feel so happy to have scored this goal and I’m so happy with my development and to be able to show what I can do.”

Silva’s goal put Frankfurt seven points clear of Dortmund in the race for a top four finish, while also furthering his hopes of breaking a long-held Eintracht club record. The 25-year-old is just four goals away from equalling Bernd Hölzenbein’s record of 26 scored in the 1976-77 season, with seven Bundesliga matches left to match or surpass the club legend and World Cup winner.

Portugal frontman Silva came into the showdown with Dortmund having received strong praise from Eintracht manager Adi Hütter in the build-up. “He’s been very, very impressive,” Hütter said of Silva. “This season he seamlessly picked up where he left off [after lockdown last season] where he was scoring all the time.”

Silva has seen his name linked with some of Europe’s biggest clubs in recent weeks, with Atletico Madrid, Manchester United and Barcelona all credited with an interest. With Frankfurt increasingly hopeful of securing Champions League football, it remains to be seen if the Porto-born forward will seek a new challenge or stay put.

“He feels really at home in our team,” Hutter says. “It’s good for him and for us that he scores so much, but he also does an incredible amount of work for the team.”