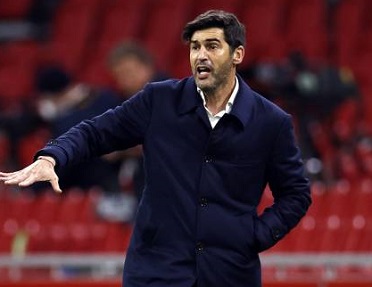 Paulo Fonseca’s Roma produced a superb comeback from a half-time deficit to beat Ajax 2-1 in Amsterdam in their Europa League quarter-final first leg on Thursday evening. After the match, Fonseca praised his team but lamented some of the reporting surrounding the club in recent weeks.

Meanwhile, Manchester United have one foot in the last four after beating La Liga outfit Granada 2-0 in Spain, with Bruno Fernandes scoring a late penalty past fellow Portuguese Rui Silva to give the Red Devils a huge advantage ahead of the return leg at Old Trafford next week.

Roma trailed Ajax to Davy Klaassen’s goal at the break in the Dutch capital, and escaped going two goals behind when Dusan Tadic missed a penalty early in the second period. The Italian side’s fortunes continued when rookie Ajax goalkeeper Kjell Scherpen fumbled Lorenzo Pellegrini’s free-kick on 57 minutes and the ball trickled over the line for an equaliser.

With the match headed for a 1-1 draw, Roma produced a winner almost out of nothing when Brazilian defender Roger Ibanez smashed the ball into the roof of the net following a corner on 87 minutes. Roma ended the match with 35% possession and fewer than half the number of shots on goal as their opponents, but with a priceless lead to take back to Italy next week.

“It was an important victory, especially after all the injury problems that we’ve had,” Fonseca told Sky Sport Italia. “Ajax are a great team, as we saw tonight, but the lads put in a wonderful performance. Qualification is still open, but winning here was very important.

“We were always aware that we could score goals here, the team felt confident even during difficult moments. It’s a big victory. It was a match of great intensity and tension, but we did what we prepared.”

The typically placid Fonseca lost his cool when discussing reports of a bust-up between Roma players this week, the latest of what has felt a persistent attempt from outsiders to excessively criticise and create controversy around the team and the ex Porto coach throughout the season.

“I have to do my work, I cannot control criticism,” Fonseca said. “What disappoints me is when there are lies and there have been a lot of them. I am not Italian, so I don’t understand why Roma, who are the only team representing Italy in Europe this week, should be surrounded by all these incredible lies. At this moment, we all ought to be encouraging and helping the Italian team.

“This week there was all sorts of chaos created with this incredible lie, the idea that the players confronted me and we had some meeting before training. It’s all a lie, it’s not right. I cannot control any of that, I can only control my work and that is what I’m doing.” 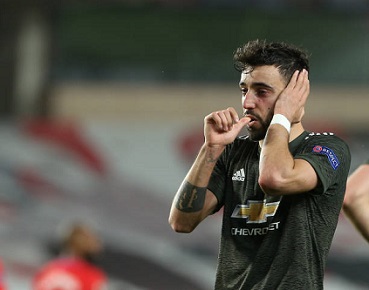 Manchester United remain the overwhelming favourites for the competition after cruising to a comfortable 2-0 win at Granada in Spain. United withstood a strong start from the hosts to control much of the game, particularly after Marcus Rashford’s brilliantly-taken opener on the half hour gave them the lead.

Granada lost Portuguese defender Domingos Duarte to injury early in the second half, before United got the second during injury time through Bruno Fernandes’ penalty. The former Sporting man was adjudged to have been fouled by Yan Eteki, and Fernandes stepped up to score albeit his kick was perhaps fortunate to sneak under Portuguese goalkeeper Rui Silva.

Rashford and Fernandes coming to the fore in a United shirt this season has been a familiar story, and Red Devils boss Ole Gunnar Solskjaer praised the pair after the game. “They’ve been exceptional, they have been so good for us and they’re so important for us,” Solskjaer said. “The first goal, very good run by Rashford and he takes the ball fantastically and a fantastic finish, and Bruno, I know he’s so confident on penalties. Even though the goalkeeper almost saved it, it was enough to give us a good lead.”

In the other quarter final ties, Cédric Soares played the full ninety minutes as Arsenal and Slavia Prague both struck late on to play out a 1-1 draw in London, giving the Czechs a chance of an upset, while Villarreal appear in control of their tie with Dinamo Zagreb after a 1-0 win in Croatia.

No Mikataryan either. Dzeko has a 10 cent brain and El Sharawaay is awful.

Fonseca is a wonderful coach but he needs to understand the political and legacy of Italian ownership and media. Its all based off ultra rich fat cats who try to ruin the...

No Mikataryan either. Dzeko has a 10 cent brain and El Sharawaay is awful.

Fonseca is a wonderful coach but he needs to understand the political and legacy of Italian ownership and media. Its all based off ultra rich fat cats who try to ruin the guy ahead of him instead of doing best by their team. Its like the old "crabs in the bucket" analogy. Remember then the douche Juve chairman Agnelli said Napoli shouldnt be in Champions league because they arent an "elite club", thats the rotten mentality you are dealing with. Rotten to the core Italian politics.

Ask Mourinho how they treated him even after he on the damn treble! Like some migrant, its insulting but thats how it is.