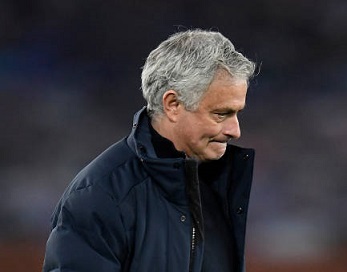 Tottenham Hotspur have sacked manager José Mourinho after 17 months in the job, the English club confirmed on Monday morning.

Mourinho leaves Spurs with the team 7th in the Premier League, five points adrift of the top four places, and less than a week before their Carabao Cup final against Manchester City at Wembley next Sunday.

The Portuguese was appointed by Spurs in November 2019 with the club languishing in 14th place after dispensing with Mauricio Pochettino. Things appeared to be going well for the former Porto boss earlier this season when a victory over local rivals Arsenal saw Spurs go top of the Premier League in December.

However, Mourinho’s side have dropped down the table in recent months and suffered a disappointing Europa League exit at the hands of Dinamo Zagreb in March. Overall, Mourinho leaves the job having won 44 of his matches in charge, with 19 draws and 23 defeats during his time at the helm.

Thank you for everything Boss. A pleasure to have worked together. I wish you all the best for your next chapter. pic.twitter.com/n3MLECMdC1

The timing of Mourinho’s departure has led some to question whether his internal reaction to the news of Spurs joining the European Super League – announced on Sunday afternoon – may have made his position untenable. Any such notion is expected to be denied, but his sacking coming just hours after football rallied against the announcement will fuel suspicion.

Perhaps the biggest question to be asked now is: Where next for the Special One? PortuGOAL wants to hear your views on which job would suit Portugal’s most successful manager of all time

If Ronaldo stays at Juventus I hope JM goes there. In my opinion Mourinho needs a club bigger than his reputation is, so he would have to work hard to earn the respect. The big ambitions of Juventus should be good enough, also the presence of...

If Ronaldo stays at Juventus I hope JM goes there. In my opinion Mourinho needs a club bigger than his reputation is, so he would have to work hard to earn the respect. The big ambitions of Juventus should be good enough, also the presence of Ronaldo there along with some other experienced players would offer Mourinho a more professional environment to work in rather than the one he had in England.

Maybe you didn't know the spat they had when Mourinho left Real Madrid!

aslong as jose doesnt come to the national side i dont care... great manager ,but hes loat hia waya with footballers in several teams and hes negative hold the buss tactics are dated and boring...