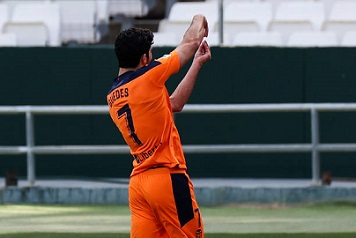 Gonçalo Guedes is hitting form at the perfect moment to make a case for Fernando Santos’ Portugal plans, after good performance capped by a goal in Valencia’s 2-2 draw with Real Betis in Spain this weekend.

Meanwhile, Seleção hero Eder finally opened his account in the Russian Premier League as Lokomotiv Moscow kept their faint title hopes alive. There was also an important goal for Portugal U21 forward Dany Mota in Italy, and Hélder Lopes of AEK and Flávio Paixão of Lechia Gdansk were on the scoresheet in Greece and Poland respectively.

Perhaps the most interesting player in the Portuguese Abroad contingent right now is Gonçalo Guedes, who is in fine form with Valencia in Spain. Guedes scored with a superb right-footed finish in his side’s 2-2 draw at Real Betis on Sunday, continuing what is becoming a consistent run of goal contributions for his side.

Guedes has two goals and three assists from his last six appearances for Valencia, and spoke to www.valenciacf.com after the match about the confidence gained from his recent performances. “It’s important for me to feel good,” he said. “I’ve played a couple of games in a row from the start, completing the entire game. I feel really good, and that I am getting better all the time, and I will try to finish the season in the best way possible.

“Mainly, I want to help as much as I can with goals, assists and good performances. We could have won. We had chances and moves that we could have finished better. Kevin and I had a two-on-one situation, and I didn’t complete the pass. These are situations that you can’t waste. We had a good game, and we leave here thinking positive. Now we have to try to beat Osasuna.”

Eder off the mark

A nice story in Russia as Portugal’s Euro 2016 hero Eder scored his first goal of the Premier League season towards the end of Lokomotiv Moscow’s 4-1 victory over Rostov. The striker came off the bench during the final stages and found the net from close range for his first goal in the Russian top flight in some 13 months.

Eder’s contract with Lokomotiv expires this summer and he is almost certain to be searching for a new club. The 33-year-old has been linked with a move back to the Premier League in England, as Brighton and Hove Albion were recently credited with an interest in taking Eder on a free transfer this summer.

The biggest story in football this Monday afternoon:

Eder scored his first league goal of the season in Russia at the weekend pic.twitter.com/3ZgnpxKy5e

In Italy, Monza are one of many teams vying for promotion to Serie A and Portugal U21 international Dany Mota is a key part of Cristian Brocchi’s side. The Luxembourg-born forward scored from close-range to put his team 2-0 up at home against Cremonese on Saturday and the goal proved the winner as the visitors pulled one back in the second half to see the match end 2-1.

Monza’s win leaves them 4th in Serie B, six points off automatic promotion but almost certain of a place in the play-offs. The club from Lombardy has never competed in the Italian top flight in their 108-year history. Indeed their 39 seasons spent in the second tier is a record for any team never to have reached Serie A. 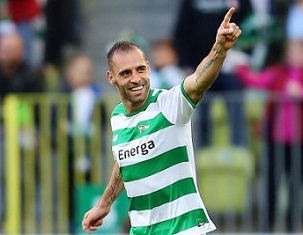 The rest: Lopes, Paixão on target

Portuguese defender Hélder Lopes scored a vital goal for AEK Athens in their quest for European qualification in Greece. The former Paços de Ferreira man put AEK 2-1 up with just five minutes remaining against Asteras Tripolis on Sunday, after which the club from the capital ran out 3-1 winners. The result keeps AEK in 4th place and three points behind Aris in the second Champions League spot.

In Poland, Flávio Paixão moved into double figures for the season in the Ekstraklasa with a last-gasp equaliser from the penalty spot to earn Lechia Gdansk a 2-2 draw against Piast Gliwice. Pedro Eugénio scored the only goal of the game in Kazakhstan as Taraz beat Akzhayik, while in Luxembourg Mohcine Hassan scored for Dudelange in their 3-0 win over Mondorf-Les-Bains and Fabio Cardoso struck for RM Hamm Benfica who won 5-0 against Victoria Rosport.

Guedes is not a world class player simple as that. Pedro goncalves is what we need

Unfortunately i agree Mike. Guedes is a poor mans Neto.

There Anyone else in the Portuguese lineup even remotely close to what Neto can do. Guedes has tremendous skill but he’s just another sideways attacker he’s afraid to take on guys one on...

Unfortunately i agree Mike. Guedes is a poor mans Neto.

There Anyone else in the Portuguese lineup even remotely close to what Neto can do. Guedes has tremendous skill but he’s just another sideways attacker he’s afraid to take on guys one on one outside of using his speed. Neto Has the ability to think quicker, you can actually see him pass for like a half a second and then he decides what to do and does it and he goes to the defenders like they are standing still. It’s so obvious to everyone that watches him play that he’s just going to be a star, I mean a bigger one than he already is.

I hope Santos calls up Pedro G but historically its most likely a no. It has nothing to do with Pedro‘s ability it’s just that Santos does not call of people who are playing well at the moment. If Pedro can maintain this consistency he will be called up but at this moment it’s very early. Same happened with Rueben Dias, Bernardo Silva, Cancelo, etc.

For myself though I would take Pedro over Rafa Silva any day of the week. I have no idea what people see and Rafa. Another highly skilled but completely passive attacker who misses sitters constantly.

Guedes is certainly NOT a world-class player, but I think he will get a call-up for the Euros. Besides his first season at Valencia, he hasn't found real consistency but that's also because he's been injury-plagued. He's had a good run of form...

Guedes is certainly NOT a world-class player, but I think he will get a call-up for the Euros. Besides his first season at Valencia, he hasn't found real consistency but that's also because he's been injury-plagued. He's had a good run of form recently. In his last 6 games for Valencia he's grabbed 2 goals, 3 assists, and 2 MOTM (and this is not including the assist he's already got in today's game).

I am in agreeance in regards to Neto, he is a special player and I hope he recovers well and quickly. It's unfortunate that he won't be available for the Euros and IMO I think he was poised to win the EPL's young POTY.

Let's also not forget the important goals that Guedes has gotten for the Selecao in recent years - he is very capable of producing big moments for us. I don't think he will be/should be starting but when he's not coming back from injury and shows some consistency, I think he deserves a spot in the squad.