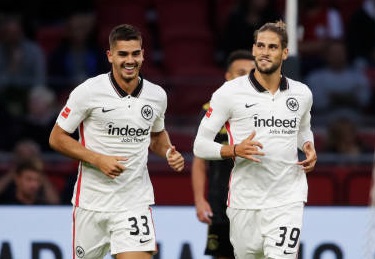 A contrasting tale of two Portuguese strikers in Germany, with former FC Porto pair Andre Silva and Goncalo Paciência each experiencing an extreme end of football’s emotional scale in the Bundesliga.

For Frankfurt’s Silva, another goal in their victory over Augsburg helped his side closer to Champions League qualification, as well as aiding his own quest for a club goalscoring record. Meanwhile at the other end of the table, Paciência’s Schalke were relegated for the first time in 32 years after a miserable campaign.

Frankfurt beat Augsburg 2-0 at Deutsche Frank Park to move seven points ahead of Borussia Dortmund, who have one game in-hand in the race for a top four spot. Silva scored his team’s second goal, nodding in yet another cross from Filip Kostic on 58 minutes for his 24th goal of the Bundesliga season.

With four matches left to play this season, Silva is now two goals away from equalling Frankfurt’s all-time record for most league goals in a season. World Cup winner and club legend Bernd Hölzenbein’s record of 26 goals has stood for 44 years, but Silva is on course to challenge the feat during Frankfurt’s final matches as they look to secure Champions League football.

The football world back to normalpic.twitter.com/tAUbUr6DtC

Goncalo Paciência left Frankfurt for Schalke on a loan deal last summer, and it is fait to say the move has proved a disaster in every respect. Schalke have been bottom of the table all season and their relegation was confirmed on Tuesday with defeat at Arminia Bielefeld, which means the team have won just two of their thirty league matches this season.

Paciência has scored just once in the Bundesliga this season, with injury ruling him out for around five months of the campaign. According to reports in Germany, the forward will not remain at Schalke as the option to make his loan permanent is voided by Schalke’s relegation, and Paciência will initially return to Frankfurt this summer to determine his future.