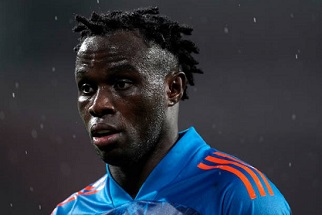 André Silva is just one goal away from equalling the all-time Eintracht Frankfurt record for most goals in a Bundesliga season after getting his 25th this weekend. Silva has another three league games this campaign to challenge the record, having struck in Frankfurt’s defeat to Bayer Leverkusen on Saturday.

Also this weekend, Nani earned Orlando City a draw in MLS with a typically audacious backheel finish, scoring his first goal of the new season. In Greece there was a brace for Bruma and a goal for former Portugal U21 winger Hélder Barbosa, while Tomás Esteves scored his first goal in English football for Reading in the Championship.

Frankfurt’s match with Leverkusen in Germany exploded into life during the closing stages after almost 70 minutes without a goal at the BayArena. The home side took the lead through Leon Bailey with twenty minutes remaining and Lucas Alario made it 2-0 ten minutes later. With Frankfurt consigned to defeat, Portugal striker André Silva headed in a stoppage-time consolation, before Kerem Demirbay made it 3-1 to Leverkusen.

The defeat means Frankfurt’s advantage in the race for a top four Champions League spot is cut to just one point over Borussia Dortmund. With three matches left to play, Silva’s team have their destiny in their own hands but the former Porto man admitted to being disappointed with the way the game went.

“Both teams wanted to avoid mistakes,” Silva said. “If you make the first mistake, you have a higher chance of losing. We didn’t do well before we conceded the first goal. It wasn’t a normal goal, but it happens. We kept trying to get the three points and went more attacking. After [my] goal we had the hope and confidence again, but then we quickly went 3-1 down. It’s a bad feeling. But we still deserve to be in fourth place. We have to stay focused until the end, then we will achieve our great goal.”

In trying to help his side secure Champions League football, Silva is also hoping to challenge the club’s all-time seasonal goalscoring record, held by World Cup winner Bernd Hölzenbein. Club legend Hölzenbein’s record of 26 goals has stood since 1977, but with three games left to play Silva is just one goal away from matching the feat.

The new MLS season played out its second match week this weekend and Portugal legend Nani was a decisive figure on Friday evening in Orlando City’s 1-1 draw at Sporting Kansas City. Orlando were trailing with around 12 minutes left to play when Nani levelled the score with a delicate backheel from close range for what was his 22nd goal since joining the club.

Portugal international Bruma is enjoying some fine form in Greece with champions Olympiakos. The former Sporting winger scored the clinching goal as Olympiakos were confirmed as Super League champions earlier this month and Bruma was again on-hand to score both goals in their 2-0 win over rivals AEK Athens this weekend.

Bruma seems hungry and focused at the moment. He got both goals as Olympiakos beat AEK 2-0 in Greece this weekend 🇵🇹🇬🇷 pic.twitter.com/0VQXrVi7Nn

At the other end of the table, there was a potentially vital goal by Hélder Barbosa for Panaitolikos. The former Porto man’s winner in the 1-0 victory at PAS Giannina keeps his side in the fight for survival, where they are currently one point from safety at the bottom of the Super League.

Reading’s bid for promotion in the Championship may have fallen away, but there was a landmark moment for on-loan FC Porto full-back Tomás Esteves in their 2-2 draw at Swansea this weekend. The 19-year-old struck three minutes into injury time to salvage a draw and in doing so scored his first goal for Reading and the first of his professional career. Reading, who have Lucas João in attack, now cannot achieve a place in the promotion play-offs following a disastrous run of form.

Finally, there were several Luso goals in some of the continent’s less known leagues. Ricardo Valente scored for Gaz Metan in their impressive 4-1 win over Dinamo Bucharest in Romania, while in Switzerland Mickael Almeida scored twice as Aarau drew 3-3 at Winterthur. Finally, Rúben Brígido scored in Kazakhstan as Ordabasy beat Kaisar 4-2; Diogo Pimentel scored for Luxembourg league leaders Fola Esch in a 2-2 draw against Swift Hesperange, while in the same league Kevin Lourenço struck for Una Strassen; midfielder Filipe Nascimento got the winner in the Polish second tier as Radomiak Radom beat Odra Opole 1-0.

With national teams now able to bring 26 players it will be interesting who takes pedro neto's place and who the other 3 players will be.....players like guedes, bruma and some of the u21s like pote now have a shot.....maybe..