“All we talk about is the title” – Can Portugal stalwart José Fonte inspire Lille to Ligue 1 glory?! 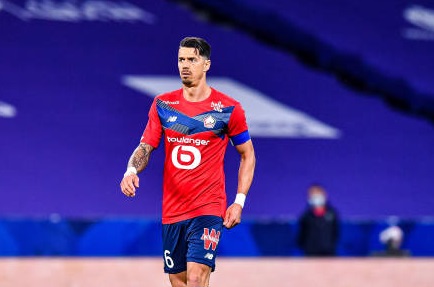 The dramatic comeback staged by Lille against Lyon on Sunday evening was the story of the weekend in French football, as the Ligue 1 table toppers made the strongest of statements regarding their title credentials heading into the final month of action.

Lille came from 2-0 down to beat fellow championship hopefuls Lyon 3-2 away from home, meaning they maintain a one-point advantage at the top of the standings. With just four matches left to play, Christophe Galtier’s side must now finally be regarded as favourites to become French champions for the first time in a decade.

There is a strong Portuguese influence in Galtier’s side, with captain José Fonte and midfielder Renato Sanches particularly influential figures. Former Braga man Xeka and U19 international defender Tiago Djaló have also played their part, while 17-year-old striker José Bica was recently named in a match squad for the first time.

It is 37-year-old Fonte, though, who has arguably taken on the most pivotal role as a mainstay in the backline. Playing alongside 21-year-old Dutchman Sven Botman in the heart of the defence, Fonte has started 33 of the 34 matches in the league campaign this season as Lille have conceded the fewest goals in Ligue 1.

Four matches remain, beginning with a home clash against Rony Lopes’ Nice at the weekend, and Fonte admits there is now a clear focus on winning the title. “In the dressing room all we about is the title,” he said on Monday. “We know that we are capable of competing with the other teams.

“We are in first, with four games to go, but this is not over yet. We will have to be prepared for the fight, as the next games are going to be very difficult.

“Everyone will be under pressure. PSG, Monaco and us, as we have players who have no experience in these situations. The mission of older players, like me, Benjamin [André] or Burak [Yilmaz], is to transmit this. We have to be strong in every game.”

Lille’s final four fixtures are favourable, but with just one point separating them from perennial champions Paris Saint-Germain and two points from in-form Monaco (five straight victories) Fonte’s men will be focused on taking all 12 points left on offer.

You can make a movie out of Fonte's career. So underrated

Andrew/ny
There are no comments posted here yet