The tie represents a particularly special opportunity for both, with Fernandes hoping to edge closer to winning his first trophy in United colours while for Fonseca the result looks set to determine his future in the Italian capital.

Roma currently occupy 7th place in Serie A having seen their European qualification hopes fade as they drifted six points behind city rivals Lazio in the top 6. As such, winning the Europa League is seen as pivotal to a successful season and to Fonseca’s hopes of keeping his job two years after being appointed.

Reports this week have suggested Roma want Maurizio Sarri to replace Fonseca in the summer. The club’s sporting director, Portuguese Tiago Pinto, is believed to be in contact with Sarri’s agent according to Corriere dello Sport, leading many to feel only a Europa League trophy would prevent Fonseca’s departure.

“I have always been focused entirely on my work,” Fonseca said when asked about his job security after the weekend defeat at Cagliari. “This semi-final with Manchester United is very important and I must stay entirely focused on a game that is too important for us.”

“This is a very important match. You don’t get to play a semi-final every day and we all know how important it is. We want to fight for the fans, the city and the club.”

“We are up against a huge team, the favourites to win the competition. We prepared well, obviously I also spoke to Chris Smalling and Henrikh Mkhitaryan, who played here. They have experience in the tournament.

“We all know it’ll be difficult and we respect Manchester United. We have great respect, but also ambition. We must dream and fight, this moment is too important for us, for the city, for the fans 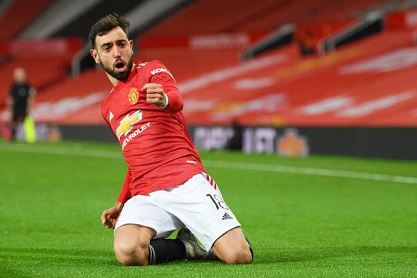 and for Italy. We want to fight for everyone.”

“It’s true we are not doing well in Serie A at the moment, but it was tough dealing with so many different matches. We want to play and face Manchester United with ambition. It’s difficult to say what the recipe for success is. Obviously, we need the perfect performance and know we cannot make mistakes.”

Key to his team’s chances of progress to next month’s final in Gdansk, Poland, will be stopping United dangerman Bruno Fernandes. The former Sporting star has scored three goals in the knockout stages of the competition so far, and Fonseca was full of praise for his countryman when asked during Wednesday’s pre-match press conference.

“Bruno is fantastic,” Fonseca said. “For what he did at Sporting and for what he’s doing at United. He did arrive a little late, but he learned so much before Sporting, developing in Italy.

“What I find remarkable is his personality. He has a lot of quality, but he is also a leader, a fighter and so, so intelligent. I’m not surprised that from the moment he arrived at United, he became a leader on that team.”

With some Portuguese presence guaranteed in the final, the other half of the last four sees Cédric Soares’ Arsenal facing Spanish side Villarreal, led by their former manager Unai Emery. Soares is also looking to win his first major trophy in English football, having captured the Community Shield with the Gunners last summer.

and Bruno bags a double