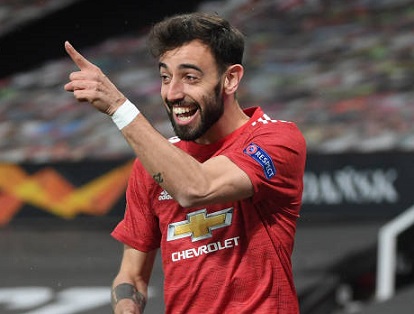 Bruno Fernandes scored twice and provided two assists as Manchester United came from behind to hammer Paulo Fonseca’s Roma and put themselves on the verge of qualification for next month’s Europa League final.

The Italians led 2-1 at half time, but the loss of three players to injury before the break and a rejuvenated performance from United saw the semi-final first leg end in an emphatic victory for the Red Devils at Old Trafford.

Roma arrived in Manchester with many reminiscing about their infamous 7-1 defeat to a prime United fourteen years ago in the Champions League. Within eight minutes on Thursday night United had shown similar confidence to take the lead through Bruno Fernandes, who finished splendidly after some classy approach play involving Paul Pogba and Edinson Cavani.

The lead lasted just five minutes, with Pogba penalised for handball and Roma awarded a penalty which was converted by Lorenzo Pellegrini. By the 33rd minute the visitors’ dangerous attacking movement resulted in them going ahead through Edin Dzeko – a man with a strong record at Old Trafford with former club Manchester City.

While the half-time scoreline gave Roma the advantage, it was an opening quarter of the tie costly in casualties. Goalkeeper Pau Lopez followed early victim Jordan Veretout in being forced off the field, before an injury to Leonardo Spinazzola after 37 minutes not only provided further disruption but also meant Fonseca could make no further substitutions.

Second half costly for Roma

United emerged from the break a far more aggressive opponent and within three minutes Cavani levelled the match at 2-2 with a brilliant finish from a Fernandes pass. The Uruguayan then gave United the lead for the second time on the night on 64 minutes and Fernandes made it 4-2 from the penalty spot after Cavani was fouled.

A beleaguered and weary Roma failed to stem the tide as United grew in confidence, and their chances of recovery were all but ended when Pogba headed in a perfect Fernandes cross to make it five and substitute Mason Greenwood gave the Premier League side four-goal advantage to take to the Italian capital next week.

“It’s a heavy defeat, obviously. I think we had a good first half, but didn’t hold out in the second,” Fonseca told Sky Sport Italia after the match.

“It’s hard to explain how we did that first half and then came out for the second with no aggression, making a lot of mistakes, leaving spaces. When they scored the third goal, the team didn’t have the mental strength to get back on their feet. It’s difficult to play against a team like Manchester United anyway, let alone when we can’t make any substitutions.

“I think it’s very positive that we reached the semi-final and played this first half in Manchester. That proves the team can compete. However, we got everything wrong in the second half.

“I don’t believe it was a tactical problem. As we showed in the first half, we allowed Manchester practically no chances. Our choices were logical ones. We lost important players early on and then 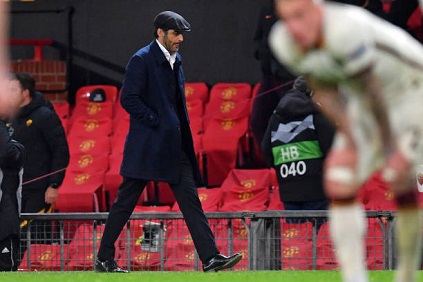 didn’t have the mental strength in the second half. I think that was the issue.”

“I saw it as a psychological issue, not reacting to the third goal. We were by no means out of the running at 3-2, but at this moment the team is struggling and we didn’t react. Diawara and Smalling were having so many physical issues, I couldn’t change them.

“I don’t want to create excuses, I am always the ultimate one responsible and of course I do not want to shy away from those responsibilities. I am just describing what happened.”

A brace for Bruno Fernandes puts the United midfielder on 26 goals for the season, and during his post-match interview the Seleção star praised the team’s performance told MUTV he is aiming for plenty more to add to his tally during the remainder of the campaign.

“The performance of the team was top,” Fernandes said. “The result is really good for us, could be better if we don’t concede goals but, anyway, we did a great job in the second half.

“We are doing really, really well and we are growing up as a team and, for me, that’s the most important [thing]. As I said before, we enjoy to play like this. You talk about the really good players, but also you have to have the players that work hard. Me, Paul and Edi don’t do anything for ourselves, if we don’t have the team around us, we are nothing.

“I scored 32 [goals] at Sporting so I expect to pass that mark! My target every time is to do better and better and my target now, as everyone knows, is to win trophies. For myself [my target] is to improve every season. I think if I score 32 goals in one season, I can do better. I know it’s a big number but why not!? If you dream about and fight for it, you can do it.”

Fernandes’ joy offered contrast to what is almost certainly an irrecoverable blow for Fonseca, who came into the tie well aware of reports Roma are in talks with Maurizio Sarri to replace him. The consensus in Italy is that only Europa League success will keep Fonseca in his job, and the former Porto and Braga boss understandably avoided addressing the subject.

“We’ll see,” he said. “It’s difficult to talk at this time, but I think we will talk about it. This isn’t the right moment to talk.”