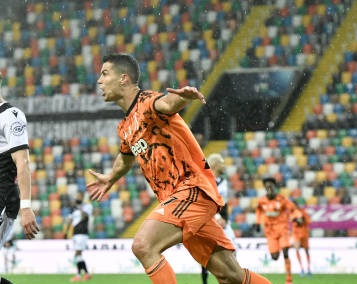 Molina struck in the 10th minute to put Udinese ahead, and the scoreline remained at 1-0 until a dramatic final seven minutes at the Dacia Arena. Ronaldo’s free-kick struck a hand in the Udinese wall for an 83rd minute penalty, which the Portugal captain smashed past Simone Scuffet to level the score.

Juve, and in particular their under-fire coach Andrea Pirlo, needed a victory and typically Ronaldo proved decisive in snatching all three points. Adrien Rabiot’s cross to the back post found Ronaldo, who directed his header on target and Scuffet failed to keep the ball from squeezing inside the near post.

In amidst the visitors' comeback joy, there was a special moment for 20-year-old Portuguese debutant Félix Correia, who was introduced shortly after Ronaldo's first goal. Correia arrived in Turin last summer from Manchester City and has been featuring for Juve's U23 side this season.

With the weekend news dominated by Inter being crowned Serie A champions, Juventus must focus on securing a top four place following an alarming slump in form this season. With just four matches remaining, 4th-place Juve have a two-point lead over Napoli and a five-point advantage over Lazio, who have one game in-hand.

Juve’s task is far from easy, with a home match against Inter still to play. For Ronaldo, goal nos. 26 and 27 of the league season saw him move closer to securing his status as the league’s top goalscorer. The Seleção man has six goals more than nearest rival Romelu Lukaku and is on course to reach the 30-goal barrier for the second season running despite his team’s troubles.

Must be as finished as they say. He only pulled out a couple of goals to turn the game around for a squad that was, quite frankly, doing nothing.

A reputable Italian journalist said today that Ronaldo will finish his contract at Juventus next year and then go to SPORTING.

I get that Sporting is Cr7s club but why would he go now when he still is playing at a high level? Sporting no offense but what is he gonna win? He still wants to win Champs league?

Justin
This comment was minimized by the moderator on the site

Well considering Porto were miles better then Juventus in there matchup and went toe to toe with Chelsea the next round and had it not been for Coronas give away they possibly wouldve made a semi final I have to disagree. As a neutral fan I have...

Well considering Porto were miles better then Juventus in there matchup and went toe to toe with Chelsea the next round and had it not been for Coronas give away they possibly wouldve made a semi final I have to disagree. As a neutral fan I have watched all the big games this year and Porto and Sporting play very similar styles and have been evenly matched in all there games. They play tough defense and press hard and are extremely well coached tactically. Is any top team going to pay for Ronaldo at 36 years old? I doubt it. So If Amorim is still at Sporting and with the 3rd spot of the Champions League back for Liga Nos there are definitely worse options for Ronaldo then coming back home where it all started getting a chance to win in the only league he played but hasn't and also a free spot in the champions league every year where given Juventus may not even make it is also a big plus. Not to mention he wont have to kill himself every game and this way can make sure hes always rested and ready to peak in the top games against benfica and porto and also the champions league. At his age this would be huge. When hes rested he is still one of the best finishers in the world. Just so happens thats the weak point for Sporting and clearly paulihno wasnt the fix to that problem. Also shouldnt discount the fact if he took the hometown discount to come back to Sporting i could also see some others follow for a last ride. Players like Moutihno and Nani and even Marcelo. Even at there ages in big games they can still offer experience and play making in short spurts off the bench. Marcelo and Ronaldo were best buds at Madrid and he looked excellent last champions league game against Chelsea and we have already seen Moutinho can still play. I dont think the odds are huge of this happening but if there was ever a time for him to do it i believe now is the time with this sporting roster and Amorim at the helm.