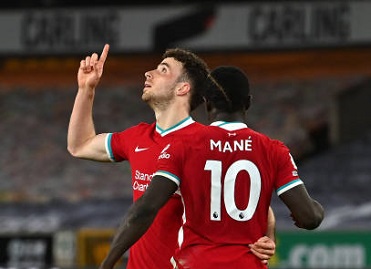 Diogo Jota has been speaking about his unconventional move to Wolverhampton Wanderers in the English Championship in 2018, and admits agent Jorge Mendes has been proved correct to take him to the then second-tier club.

Speaking to British publication FourFourTwo, Jota says he and his family had doubts over him leaving Atletico Madrid for the West Midlands club, while also looking ahead to the European Championships and reflecting on his earliest Seleção memory.

Jota joined Wolves on an initial loan deal ahead of a €14m transfer from Atletico, having spent the previous season with FC Porto in his homeland. Joining Nuno Espírito Santo’s side alongside Ruben Neves, Jota quickly established himself at Molineux and helped Wolves to promotion in his first season.

“A short while ago, I saw a Transfermarkt study that had the Championship as the sixth-most valuable league in Europe,” Jota told FourFourTwo. “The Portuguese league was listed fifth, so from that perspective you may say that moving to Wolves was a step back at that moment, but I found the Championship to be very competitive.

“But it was about the project, too – in my opinion, Wolves have got the right people running the club. Sometimes you need to take a step back to take two steps forward. In the end, things went well and it proved to be the right decision, even if it sounded a bit risky back then.

“I had an uncle who asked me why I was doing it, but he agrees with me now! I must admit that even I wasn’t totally sold on the idea when I initially heard about it from my agent, Jorge Mendes. He eventually convinced me, and now he says, ‘See how I was right all along?!’”

Jota, 24, has made a strong impression since joining Liverpool from Wolves last summer, albeit with disruptive injury midway through the campaign. With the domestic season coming to an end, attention will shortly switch to the international stage and Portugal’s defence of their European Championship crown this summer. 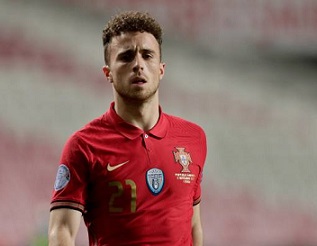 The English magazine asked Jota about his memories of the Seleção’s Euro 2004 quarter-final win over England in Lisbon, before inviting him to assess a difficult a difficult group for the upcoming tournament which sees Fernando Santos’ side drawn alongside world champions France as well as Germany and Hungary.

“That [Euro 2004] was my first footballing memory,” Jota recalled. “I remember watching the quarter-final against England – I was sat in the living room with my dad and my brother, and we were all so happy when we won. I couldn’t believe how Ricardo managed to stop a penalty with no gloves on. That was such a remarkable moment for me.

“This year? I always stress that Hungary are there, too. Remember, when we won Euro 2016, we failed to beat them during the group stage. We’ve been handed a very difficult draw, but the Euros were never meant to be easy. Regardless of that, we know the quality we have, so if we’re able to build a good team in the true sense of the word, I believe we’re capable of getting through to the knockout stages.”

I’m just going to throw this out there and see what you guys think for a starting 11. I’ll describe my reasoning why I came up with this later. This is assuming everyone’s healthy and in form.

I’m just going to throw this out there and see what you guys think for a starting 11. I’ll describe my reasoning why I came up with this later. This is assuming everyone’s healthy and in form.

Cancelo and Raphael will have the license to go forward with instructions to get back as soon as we lose possession. Now understanding that this game happens quickly and they won’t always be able to, Cedric and Mendes are our best fullbacks as far as defending goes so hopefully they can “control” the wingers that might transition quickly against us. So the cons with this setup is sometimes our fullbacks might be left alone but the keyword here is sometimes. Cancelo and Raphael do have an ability to cover lots of ground and they can defend better than most.

The pros to this lineup is Cancelo and Raphael are arguably our best wingers going forward and they’re very comfortable playing off of wide forwards because they do that all year with Dortmund and City. Jota and Raphael will combine well and Cancelo and Bernardo will combine well. Another thing too is Bernardo can help cover back to help Cedric assuming Cancelo gets caught up to high, same thing goes with Jota helping Mendes.

See what we have here is a midfield full of guys with high motors and ability and I think that will be a key to disrupt these teams we will play. Bruno in the middle will orchestrate the flow of the game and he’ll have 4-5 options going forward at any point.

There’s obviously some weaknesses that can always show up but I think this could be our best 11 if we want to put our best players out there in their most dangerous spots. As for substitutions, guys like Renato can sub in for Cancelo or Raphael, Joao Felix can sub in for Jota, Trincao can sub in for Bernardo.

Haha I just realized I didn’t put Bruno in there. So Bernardo would have to be dropped for now I guess. Maybe something like this with the same idea I said above, just sucks not having Bernardo out there but I could see Cancelo and Bernardo...

Haha I just realized I didn’t put Bruno in there. So Bernardo would have to be dropped for now I guess. Maybe something like this with the same idea I said above, just sucks not having Bernardo out there but I could see Cancelo and Bernardo swapping perhaps. I don’t know, clearly my brain is only thinking about the Euros all the time lol.

I like the idea of a 4132. To have the ManU Bruno = Seleção Bruno you make the equation:
Palhinha = Pogba, Ronaldo = Cavani, Jota = Rashford.
Cancelo and Raphael in midfield is a smart idea, they can of course be replaced with Bernardo and...

I like the idea of a 4132. To have the ManU Bruno = Seleção Bruno you make the equation:
Palhinha = Pogba, Ronaldo = Cavani, Jota = Rashford.
Cancelo and Raphael in midfield is a smart idea, they can of course be replaced with Bernardo and William or Bernardo & Renato. Key is th have a strong middle axis Dias --> Pahinha (or Danilo/William) --> Bruno