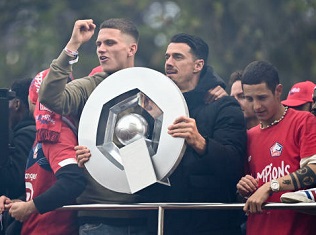 Lille captain José Fonte won the first top-flight trophy of his club career on Sunday, leading the French club to the Ligue 1 title ahead of Paris Saint-German on the final day of the season.

Lille cruised to a 2-1 win at Angers, claiming the win needed to clinch a first French title in ten years. Fonte was joined in the title-winning squad by Renato Sanches, Xeka and Tiago Djaló, and admitted the size of the achievement was not lost amid the celebrations.

“It's hard to believe we are champions, it’s difficult to comprehend what we did,” he said during the post-match reaction. “We did something amazing. The whole team has been amazing, I am very happy for everyone. We are champions.  It's for the supporters, football without the supporters is nothing. We really want to be with them, we want to celebrate with them. It's crazy. Twelve months of sacrifice, of work, we have shown that we are a real team. We have to come back to Lille and celebrate.

“It's a victory of the collective, of work, of solidarity and of talent, because there is also a lot of talent in this team. I want to congratulate everyone here at the club, the staff, the players, the supporters, this victory is for the North of France and for us, people who work and deserve a lot. Christophe Galtier, he has this ability to unite everyone, to be attentive to details, he is an excellent coach.”

Lille’s achievement comes amid fierce competition from the likes of perennial French champions Paris Saint-Germain as well as Monaco, who hit tremendous form during the second half of the season. Lille lost just one of their last twenty league matches, achieving the consistency required to see off their rivals.

“We're happy because it's a real competition, we played against real teams: PSG and Monaco have had great seasons,” Fonte added. “We showed that we had a great level. I think for me it's almost at the same level as the European Championship (with Portugal in 2016). PSG are a team with a lot of quality, in a competitive league. It's normal that the title of European champion is the best, but this one is very close. A moment like this is rare.

“Lots of people worked to help us, this title is for everyone no matter what little job they do. In Lille, everyone is doing a lot to help us. The supporters are always with us. After a tough time like the coronavirus, it's good to give them that. When you play in a stadium without supporters, it's not the same thing. We want to come back to the stadium with them. We want to celebrate with them. "

Fonte was then asked if he expects to stay at Lille or leave this summer on a free transfer. The 37-year-old has been a revelation at the club since joining from Chinese side Dalian Pro three years ago and missed just two matches this season in the league.

“I don't know [if I’m going to leave Lille] I just want to celebrate, to be with the supporters, my teammates,” he said. “It's time to enjoy, to be happy. I don't want to think about my situation. I had a good season; we'll see what will happen. I like being in Lille. The truth is that I feel very good here, I believe the supporters think I am doing a good job, I believe the president too. I am calm about it.”

Keep the momentum going at EURO 2021.

WE ARE ALL PROUD OF YOU'LL.