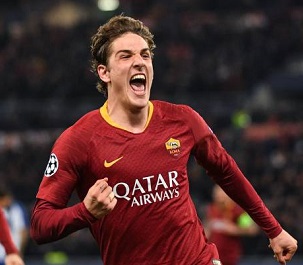 José Mourinho is preparing for his new role as coach of AS Roma ahead of next season, and one of the club’s biggest talents has been speaking to the Italian media about the Portuguese’s impending arrival.

Nicolo Zaniolo, regarded as one of the brightest emerging stars in Serie A, spoke to Sportweek, the weekly magazine published by Gazzetta dello Sport, and suggested Mourinho could be crucial in Roma improving their performances in bigger games.

Roma dispensed with another Luso manager, Paulo Fonseca, earlier this month after a disappointing end to the season. Fonseca spent two years at the Stadio Olimpico, during which the team often showed promise, but a 7th place finish led to sporting director Tiago Pinto making the change and installing Mourinho on a three-year contract.

"We are excited,” said Zaniolo, who is recovering from a serious knee injury suffered in September. “He is a great coach; he has won a lot. We want to show him what we are worth. For me it is an honour to be coached by him. I cannot wait.

“I think like [Mourinho] and believe we must always aim for the maximum, and nobody likes to lose. He will be able to handle the crucial matches, which we have been lacking this season.”

On what went wrong for the Giallorossi this year, Zaniolo said: “Until January we were third, with Juventus below us. I thought about the Champions League and the Scudetto. Then there was a bad period: too many tight matches, too many injuries and too much bad luck.

The Roma revolution under Mourinho may see further Portuguese reinforcements, with the club linked with an array of players – including Sérgio Oliveira, Ricardo Pereira, Daniel Podence and Rafael Leão – as well as potential additions to the recruitment department such as Leicester City scout José Fontes.