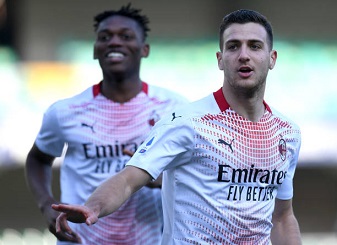 Diogo Dalot looks set to return to Manchester United ahead of next season, but the Portuguese youngster says he has made big strides in his development while on loan with AC Milan in Serie A.

Dalot, who joined United from FC Porto in 2018, was allowed to leave on a 12-month deal last summer having seen opportunities at Old Trafford limited. The defender has featured in 33 matches for the Rossoneri as Stefano Pioli’s side secured Champions League football.

Speaking to Gazzetta dello Sport this weekend, Dalot was asked for his thoughts on the year spent at San Siro, as he prepares for Portugal’s U21 European Championships quarter-final against Italy in Slovenia on Monday.

“I’m happy to have become more and more complete,” he says. “Italians love football. They talk about it always and being part of this culture has been a fantastic experience. And on the pitch, I feel I have improved a lot tactically.

“I have learned in some defensive aspects and it has been fantastic to develop these qualities. But not only that: in attack learning more about high pressing and recovering the ball as soon as possible. It is all very useful. I learned many new [Italian] words and new concepts.

“What did Pioli teach me? That the team must be focused for the whole ninety minutes and be aware of every single aspect of the match, of what is happening. And the belief that everything you prepare in training will happen in the match and play out that way.”

Milan threatened to challenge strongly for the Italian title for much of the season before falling behind city rivals Inter in the final stages, but Dalot insists the team met their targets, before avoiding questions about his future.

“[The Champions League] was our goal from the beginning. It is true that at a certain point we also thought about the Scudetto, but the important thing was always to qualify for the Champions League. And we are very happy to have succeeded.

“The worst thing about the season was playing without fans. Before the derby games and before the matches with Atalanta we had a taste of what they can give us. A full San Siro is something out of this world.

“I can only say that I had a fantastic year and I met beautiful people. It was a real pleasure to play for Milan but now I just think about the European Championships and I really don’t know what will happen then.”

Dalot is hoping to become European champion with Portugal at youth level for the second time, having won the U17 tournament in 2016 in Azerbaijan. Dalot has also represented the Seleção in at the U19 European Championships in their run to the semi-finals in the same year.

“[Winning] would be a good sign for our football,” he says. “It’s a pleasure being part of this generation.”