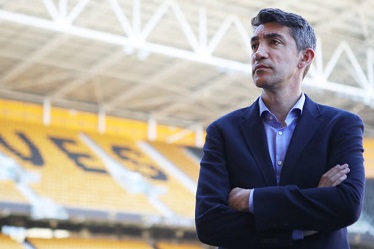 Bruno Lage has been officially unveiled as the new coach of Wolverhampton Wanderers, succeeding countryman Nuno Espírito Santo at Molineux.

Lage returns to football almost a year after resigning at Benfica following 18 months in charge at Estádio da Luz, during which time he won the Primeira Liga in 2018-19. The Wolves job represents the second managerial role of Lage’s career.

Nuno left Wolves last month after four years in charge and is widely expected to take a new job this summer, but the Portuguese influence at the club shows little sign of slowing down with Lage’s arrival. Jorge Mendes, who represents both Nuno and Lage, remains a key figure in the Wolves’ hierarchy and his success in installing another of his clients in the role is likely to see the influx of Portuguese talent continue.

“First of all, I’m very happy,” Lage, 45, told the club’s media. “It’s a big opportunity. I’m very happy because I’ve returned to this country, and to be the manager of a big team.

“It’s a team and a club that wants to do history and a chance to compete in the Premier League. So, I’m happy, excited, with a big ambition to do great things for this club.

“I want to create a good dynamic of group, with my staff, with all the departments of the club. I have tried to link all together to start to build up the new cycle.

“I think it’s a good opportunity to understand what Nuno [Espírito Santo] did in these four years and my ambition is to continue and to improve what he did.”

Working for the future

Lage did not play football professionally but has been in the game since his early 20s when he worked as a fitness coach at hometown club Vitória de Setúbal’s U17 side. Having worked his way up the ranks of Portuguese football, Lage spent several years with Benfica’s youth teams before heading abroad to take roles in UAE and Britain, where he worked as assistant coach for Sheffield Wednesday and Swansea.

“I was here [in the UK] for three years, so I know Wolves, but now, the best thing to do – the next thing to do – is to know everyone better,” he said.

“That includes the club, the fans, and also to try to create a plan, just not for the next game or the next training, but for the future.

“That’s why for me, it’s very important to create that dynamic of teamwork here in this building; to try to realise what we are doing in the future.”

Good coach, wish him well at Wolves. Expectations will be high, and Jorge Mendes will continue to wash his dirty money with this club, so Lage will have to be careful with that.