“I am a much better coach now” – Mourinho arrives at Roma 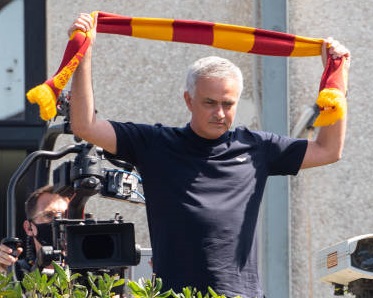 José Mourinho was finally paraded in Rome on Friday afternoon as new coach of AS Roma, and spoke at length about his new job and what attracted him to return to Italy with the Giallorossi.

Mourinho was given an incredible reception by the club’s fans as he arrived at the training ground, with supporters lining the surrounding streets as the Portuguese arrived to make his first appearance in the Italian capital since taking the job two months ago.

“I’m excited since the first day,” Mourinho told Roma’s online media. “And I mean really since the first day, since I met the owners and [sporting director] Tiago Pinto and I immediately had a very positive feeling. It means a lot to me that the enthusiasm is based on conversations and ideas exchanged, but also something I value a lot which is human feelings. So since day one I have been looking forward to the real day one – arriving in Rome.”

Roma were taken over by American billionaire Dan Friedkin last summer and with Portuguese Tiago Pinto, 36, installed as sporting director the club opted to dispense with Paulo Fonseca in May to mark a new direction at the Stadio Olimpico. Mourinho reveals that his impression of the ownership is different from what he has experienced at times during his career.

“Something that really impressed me: as you know in my career I had different experiences and I worked in clubs with similar situations of a foreign ownerships. I was impressed by the fact that Mr Friedkin and his son were always speaking about the Roma fans. They were not speaking about themselves or their project. In many occasions you feel like the ownerships speak about the clubs like their clubs – which in reality by the legal point of view is true – but I found them speaking about the club being for the Romanisti and we want to do it for them.

“We want to make a Roma of success, but a future of success. Not an isolated moment of success that everyone would enjoy but we don’t want negative consequences of it. We want to organize the club in every way related to football. We want to make something really big but it has to be step by step involving all the structures around the football team. To leave a legacy in this club, doing it for the future, for the fans.

It is eleven years since Mourinho left Italian football with arguably one of the greatest achievements of his career as a treble-winner with Inter. Asked how he has changed as a coach since leaving Serie A, Mourinho reflected on his experienced in Spain and England while insisting his desire to improve is as strong as ever.

“I’m much better. I think this is a job where experience means a lot. With experience it feels like everything become déjà vu because you have been through so many experiences. Since I left Italy I went to Real Madrid which was an incredible experience and I reached my dream of winning [titles in] Italy, England and Spain. 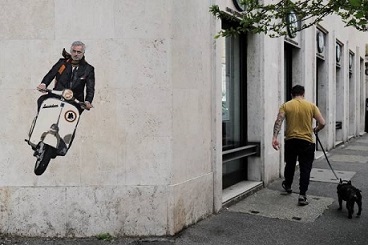 “Then back to England where my family is based and of course I wanted to go. I have even the extreme experience of taking a team to a final and not playing the final, which is something I thought would never happen in my career and it happened. So with so many experiences and learning from the good moments and the bad moments, I am a lot more prepared than I was.

“It’s the kind of job where you can only get better until the day you lose your motivation, which I believe is the only thing that can make a football coach decide to stop or stop learning. That is not my case, very far from it – I’m learning every day – so I think I’m much better. And of course it’s one thing to come to a country for the first time from level zero with everything to learn. Of course that’s not my case: I know Italy as a country, as a football culture and I know about Roma because in my time in Italy Roma was the real rival. So I’m in a better position now.

Fan reaction to Mourinho’s appointment has been detailed on social media across recent weeks. Some Roma fans have even taken to producing murals depicting Mourinho on walls in the Eternal City as excitement grew ahead of his arrival, but the former Porto boss says he does not yet warrant such affection.

“The way people have reacted, I think I don’t deserve that,” he said. “Because I have done nothing for them. Of course [I’m] emotional, of course pleased, of course grateful. Of course it puts more responsibility on me to not let people with that passion down. I can only say that what they did for me - before I have done something for them because I’ve done nothing for them - I can only be extra motivated. I’m going to do everything to repay all the love and passion they showed me.”

Good luck to you Mourinho. Now do me a favor and accomplish something rather than jumping from club to club and complaining about players or whatsoever. It appears you are losing your "magic". Let's turn that situation around.

I sink I will satart very fast, very fast, zat is what i do. Den, at za first bump in the road I will lose and we will spiral out of control. I blame players, I blame club, i blame za president but always Mourinho wins, always. Zat is paramount....

I sink I will satart very fast, very fast, zat is what i do. Den, at za first bump in the road I will lose and we will spiral out of control. I blame players, I blame club, i blame za president but always Mourinho wins, always. Zat is paramount. Because I am za special one.

I use to be a fan , not anymore. He's ego has outgrown his head.