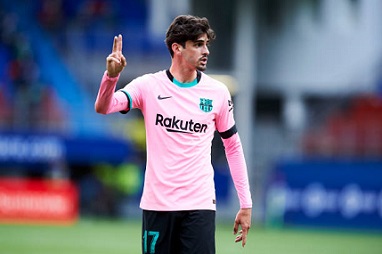 Trincão arrived at Barcelona last summer from Sporting Braga, but was granted limited opportunity to impress under Ronald Koeman and reports suggested the club were open to offers this summer.

Wolves, who appointed former Benfica boss Bruno Lage as Nuno Espírito Santo’s successor last month, have taken some by surprise in announcing the deal to add Trincão to their large contingent of Portuguese in the squad.

It is an exciting deal for Wolves fans, with two of Portugal’s brightest young talents lining up on either flank, as Trincão re-encounters Pedro Neto. The two wingers are both full Portugal internationals and curiously played for the same kids team as 8-year-olds in the northern Portuguese town of Viana do Castelo.

Fantastic article (in Portuguese) by @pedrojscunha on @maisfutebol on the football journey of Francisco Trincão & Pedro Neto, teammates as 8-year-olds in the northern town of Viana do Castelo, and now teammates for the full Portugal team https://t.co/O7iD9GndSr pic.twitter.com/Dfh2HBQdrd

The transfer also signals an apparent intent by Wolves to become a more attacking team under new coach Bruno Lage, and many football bets will be wagered that the West Midlands club can break the top six in the English Premier League this season.

With as many as ten Luso players often contracted at Molineux at any given time, the welcoming culture for talent from Portugal was a factor mentioned by Wolves technical director Scott Sellars when making the latest arrival official.

“We have a large Portuguese contingent, and they look after each other well, but are also integrated in the whole group,” Sellars said. “They’re really hard-working, with a good mentality, so I’m sure he’ll integrate well and settle in quickly.

“With the manager’s Portuguese background, he knows him and speaks very highly of him, so he’s a player we’re very excited to be bringing to the club.

“We’ve watched him a lot, especially over the last couple of months, so he’s been on our radar for quite a while. He’s got loads of quality – signing for Barcelona from Braga shows what potential he’s got. He’s 21 and has played quite a lot of games in La Liga, so we think he’s ready for the Premier League.”

Should Trincão adapt as effortlessly as many of his countrymen, a place in Portugal’s squad for the World Cup in Qatar next year becomes an obvious target for the 21-year-old. Wolves begin their Premier League campaign and the first official match of the Bruno Lage era with a trip to Leicester next month, before an intriguing home match against former coach Nuno’s Spurs.

Jason
This comment was minimized by the moderator on the site

Great signing by wolves. It was disappointing that he was unable to play for the u21 this year due to covid isolation requirements but he is an incredibly talented player and should get a lot more playing time at wolves than he would’ve at Barca....

Great signing by wolves. It was disappointing that he was unable to play for the u21 this year due to covid isolation requirements but he is an incredibly talented player and should get a lot more playing time at wolves than he would’ve at Barca. And he gets to reconnect with Pedro Neto who has been a teammate of his since childhood in Viana and then later at Braga. Let’s go wolves crack the top 6!

They should of got him as soon as Jimenez when down. Fabio Silva is too young yet, Trincao is ready. If Wolves can stay healthy they should have a good season. They just rely so much on their 1st team, no room for major injuries.

Best of luck, Trincao. Unfortunately alot of our younger players go to these big clubs like Atletico or Barcelona and end up sitting on the bench. I hope he gets playing time.