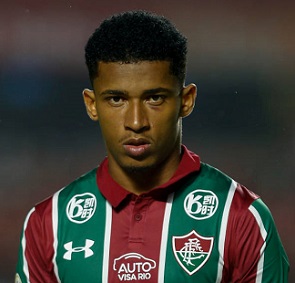 Spanish champions Atletico Madrid have announced the long-awaited signing of Portugal U19 international forward Marcos Paulo on a five-year contract from Brazilian side Fluminense.

The 20-year-old, born and raised in Rio de Janeiro in Brazil, arrived in Spain’s capital on a free transfer after the expiration of his contract with Fluminense, and will link up with Seleção star João Félix at the Wanda Metropolitano.

Marcos Paulo’s Portuguese citizenship was gained through his grandfather, António Costa, who is from Vila Cova, a small village in Vila Real, and emigrated in his teens to Brazil, where he remains to this day. While in South America, António became a parent to Marcos Paulo’s mother, Paula, who obtained Portuguese documentation in 2018 which immediately qualified her son as a Portugal citizen.

A sharp response from the Portuguese Football Federation led to a call-up for the youngster in early 2019, initially to represent the under-18s and then take part with the under-19s in the Toulon Tournament for his grandfather’s country. Marcos Paulo had played youth team football in Portugal ahead of his teenage years in 2013, taking part in a tournament in the land of his ancestors while representing local Rio de Janeiro club Niterói.

Having been used sparsely by Brazil at youth level, the call from Portugal in 2019 offered the then 18-year-old the chance to sample European football at close quarters as he progressed through the ranks at Fluminense.

“My grandfather is Portuguese, and I had the opportunity to obtain dual citizenship and be called up for them,” he said after his selection. “I went there, learned a little about the culture, they liked me a lot, I liked it there, and I joined.”

After helping Portugal win the Toulon Tournament in 2019, scoring against England along the way, Marcos Paulo had his path to the seniors mapped out in detail by the Portuguese Federation, who also shrewdly advised the youngster of the importance such appearances have in showcasing his talent to attending scouts from across Europe.

“I wasn't being called up here [in Brazil] so I wanted to learn a little about football abroad, in Europe, and adapt little by little,” Marcos Paulo said. “It's been really good. There, football is very intense. More intense than here, more physical strength, more tactically organised. It’s difficult to adapt quickly, but with dedication and determination you can pick it up.”

Despite his connection with Portugal in 2019, Marcos Paulo has yet to rule out representing the country of his birth, saying he has not “closed the door” although his decision to turn down an opportunity to join a Brazilian youth training camp shortly after his Portugal experience has done little to encourage the South Americans.

Speaking in 2019, his grandfather António Costa insisted the decision would be left to the player, despite his obvious pride at Marcos Paulo’s showings for Portugal. “I am very happy that my nationality can benefit Marcos. Seeing him wearing the shirt of Portugal is very exciting. It makes me happy. He can choose between Portugal and Brazil, I am cheering. The choice is his and I will support the choice he makes!”

Atletico Madrid's Brazil-born signing Marcos Paulo gets his Portugal citizenship via his grandfather, António Costa, who is from Vila Real. "I'm very happy my nationality can benefit Marcos. Seeing him wear the Portugal shirt is very exciting. It makes me happy" said António 🇵🇹🇧🇷 pic.twitter.com/Pv8nNvohp1

Returning to the subject of Marcos Paulo’s big move, the switch to Atletico has been considered inevitable for some time, although the player's road to Madrid has proved costly for his former club and lucrative for Los Rojiblancos following a protracted transfer saga.

After a breakout year in Brazilian football during 2020, Fluminense placed a € 30m valuation on the wide forward last summer, hoping a battle between European clubs would conclude before Marcos Paulo moved into the final year of his contract. However, the pandemic scuppered the spending of many clubs across the continent and a big-money move for the youngster was widely deemed impossible.

As such, Fluminense began to accept that a lower value transfer, perhaps in January, should become a priority. French side Marseille, then under André Villas-Boas, were thought to have snuck ahead in the race in the autumn, but instead the season progressed without a deal being done and a free transfer this summer became a grim inevitability for Flu.

The absence of a transfer fee will no doubt help ease the pressure on Marcos Paulo, in stark contrast to the heavy expectations heaped on colleague João Félix after his € 126m move from Benfica.

Switching permanently to Europe could also facilitate Portugal’s ability to confirm the player as a potential senior international, now that his long-term club future has been secured. With the Portuguese Football Federation having proved successful in convincing the player of the benefits of choosing the Seleção at youth level as a matter of mutual convenience, there will no doubt be a keen eye on Marcos Paulo’s progress in Spain from those at the FPF.

Good luck to him.
If he chooses Portugal they would be great.