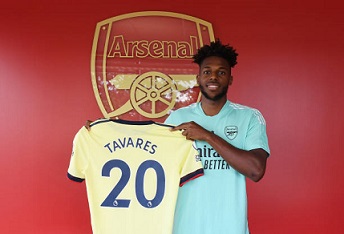 Portuguese defender Nuno Tavares has completed his move from Benfica to English Premier League club Arsenal on a long-term contract for a base fee of €8m.

The 21-year-old has been in discussions with the London club for several days and after spending a period in isolation and completing a medical Tavares’ move was finally made official by Arsenal on Saturday morning.

“We welcome Nuno to the club,” said coach Mikel Arteta. “He is a young player with great promise who has developed very well with Benfica in recent seasons and has also shown his quality by being part of Portugal Under-21s.

“Nuno’s arrival will give the squad extra strength and options in defence, particularly with this energy on the left side of the pitch. We look forward to Nuno’s arrival soon, his integration into the Arsenal family and playing in front of our fantastic supporters.”

Tavares himself admitted that the process of signing for the Gunners was not quick, but says the club made him feel wanted and convinced him of their plans for the future.

“I’m so excited because it’s a big club and for me as a young guy it is a pleasure to be here. It’s good for my career. To begin in Arsenal is a big club and I’m very happy.

“No it was not a quick process. It was more things of the contract and things between the clubs with Arsenal and Benfica. It was not quick and it took a long time.

“When I finished the season my agent told me Arsenal are interested in me. In the first impact I was very happy and after this I dreamed about this with my mum and I’m so excited to be here. Now I’m here I’m so happy.

“[Mike and sporting director Edu] spoke with me every time and called me. I feel that people want me here. I like that because I need this strength and I am so grateful for it. 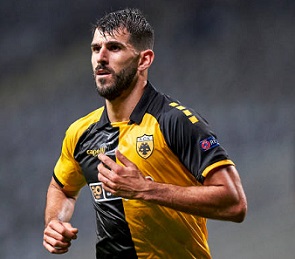 Meanwhile, former Portugal international striker Nélson Oliveira has switched clubs in Greece, leaving AEK Athens on a free transfer to sign for PAOK. The 29-year-old striker has been in impressive goalscoring form since moving to Greek football, notching 26 goals in all competitions during his two seasons in Athens.

After signing a two-year contract with last season’s runners up PAOK, Oliveira admitted his form last season did not quite live up to the standards of his opening year in the country, but says he is pleased to have signed for one of Greece’s most ambitious sides.

“First of all, I’m very happy to join a big club like PAOK and motivated to begin training and meet all the guys and meet the coach, who I’ve spoken to, in person,” Oliveira told the club’s media. “When you have the chance to play for a big club like PAOK, it will make my career richer.

“I would say in the first season [in Greece] I had a very good season. I had some injuries but I had a great season. My second season was not so good, I did not reach even close to my level. I also know the reasons but I’m not a guy who likes to use excuses. The first season was great, the second was not at the level I can give.

“I know from these two years [in Greece] that this is a big club. Always fighting to win trophies. So that was another reason for me to come here. My message is that I will fight and give everything, like I always have in my career. I’m one more piece of this family and we will try to achieve our goals.”

Oliveira continues a strong tradition of Portuguese representing the club from Thessaloniki, where Vieirinha is captain and a club icon. Porto boss Sérgio Conceição was a popular figure with the club towards the end of his career while playing under current Portugal manager Fernando Santos, while the likes of Ricardo Costa and more recently Sérgio Oliveira have turned out for PAOK and Abel Ferreira spent just over a year in charge. Former Benfica man José Moreira was appointed the club’s goalkeeper coach earlier this year.

I saw Nuno and got scared. Woah! Dodged a fast one. Nuno Mendes ain't going nowhere! Quite a different experience for young Portuguese players at Sporting. I suppose if you're only in it for the money, or maybe your parents are only in it for the...

On a side note, Sporting has made subtle yet excellent moves. Most importantly, preserving the team. Joao Mario's departure is unfortunate however.

Thought the last season, I thought Nuno Tavares showed real capabilities of being Benficas number 1 when they finally decide to cash in on Grimaldo. Instead they let this young promising player go (and not for an irresistible amount like in the...

Thought the last season, I thought Nuno Tavares showed real capabilities of being Benficas number 1 when they finally decide to cash in on Grimaldo. Instead they let this young promising player go (and not for an irresistible amount like in the past). I question what the hurry was with this?

Now I’m sure JJ will request some Brazilian reject who will cost just as much as Tavares sale.

The hurry was putting together LFV's bail money.


I also do birthdays and bar mitzvah's everyone.