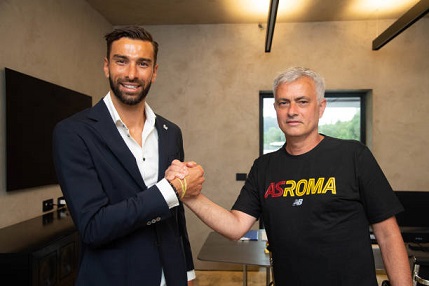 Portugal goalkeeper Rui Patrício has completed his long-anticipated move from Wolverhampton Wanderers to AS Roma on a three-year deal, the Italian club confirmed on Tuesday.

Former Sporting man Patrício arrived in the Italian capital earlier this week ahead of finalising a move reportedly worth an initial €11m plus conditional bonuses. Patrício spent three successful seasons at Wolves under Nuno Espírito Santo, but his move to Rome has been widely expected for several weeks.

“Roma is a big club and a new challenge and I’m excited to try and help the club achieve its targets,” Patrício told reporters after putting pen to paper at the Stadio Olimpico.

“In José Mourinho we are talking about one of the greatest coaches in the world and I am excited to start working with him and doing everything I can to help the team.”

Roma’s Portuguese sporting director Tiago Pinto added: “Rui Patrício brings with him a huge amount of success with the Portuguese national team and a number of successful seasons in the Premier League in which he only underlined his quality: as we welcome him to the club we are certain that our group of players will benefit from the arrival of a goalkeeper with such an array of international experience to call upon.”

Wolves are expected to secure a deal for ex-Porto goalkeeper José Sá as a replacement for Patrício. 28-year-old Sá has spent the last three seasons in Greece with Pedro Martins’ Olympiacos, and it is thought a deal to bring him to Molineux roughly equals the fee brought in by Patrício’s sale.

Sá would represent the second Portuguese arrival at Wolves so far this summer under new boss Bruno Lage, after Francisco Trincão joined on a loan deal from Barcelona.