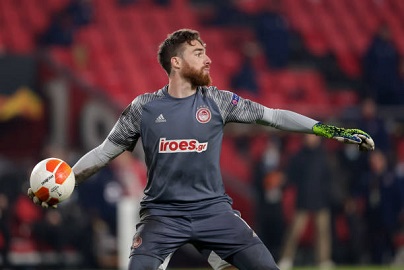 Wolverhampton Wanderers have completed the signing of Portuguese international goalkeeper José Sá on a five-year contract from Greek champions Olympiacos.

Former Porto man Sá replaces Rui Patrício as the first-choice goalkeeper at Molineux after the Seleção no1 left to join José Mourinho’s Roma earlier this week.

Sá is believed to have agreed terms on his move to England weeks ago, but the deal inevitably hinged on Patrício finalising his switch to Italy. The 28-year-old becomes Wolves’ second Portuguese arrival of the summer after Francisco Trincão, who arrived on loan from Barcelona earlier this month.

Speaking to the club’s media, Wolves director Scott Sellars said: “José is somebody who is very much coming into his peak years as a goalkeeper and has always been high up on our target list.

“He’s aggressive when coming for crosses, he commands his penalty area, has excellent distribution and he’s a very pro-active goalkeeper, and will be an important part in how we want to play under Bruno.

“He’s also gained so much experience throughout his career, especially over the last few years while playing in Greece, appearing for Olympiacos in the Champions League and in the Europa League, where he played against us not so long ago.

“He’s played for Portugal; he’s won several league titles and we certainly feel he’s a keeper who is ready for that next step into the Premier League.”

Sá has spent the last three years at Olympiacos under Pedro Martins, where he has played a key role in re-establishing the club as the dominant force in Greek football. Sá made 122 appearances for Olympiacos, helping the team to back-to-back Super League titles as well as famous European wins over the likes of AC Milan and Arsenal.