Gonçalo Paciência: Fighting injuries and fan distrust at Frankfurt to reignite his career 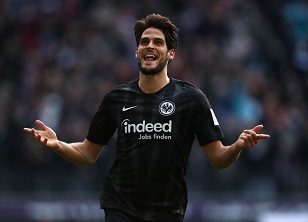 Gonçalo Paciência is back at Eintracht Frankfurt ahead of the upcoming Bundesliga season, and for the ex-Porto striker there is little doubt the new campaign represents a pivotal moment in his career.

Paciência spent last season on-loan with fellow German top flight side Schalke, who were relegated following a humiliating year in which they won just three matches. For Paciência, just one league goal from nine starts as injury issues resurfaced, leading to over four months out with a knee problem.

It has been a familiar story for the 26-year-old since moving to Germany. Shortly after signing for Eintracht from FC Porto in the summer of 2018, Paciência suffered an ACL injury which cost him the first half of his debut season, and other issues have meant the forward has managed just 27 league starts in his three years in German football.

Paciência is now back in pre-season with Eintracht following Schalke’s relegation, but another obstacle has presented itself as sections of the club’s fanbase have been hostile towards his return. The displeasure can be traced back to comments made by Paciência when he arrived at Schalke last summer. “I’m so impressed by the stadium and the fans. I am from Frankfurt; the atmosphere is great there too. But here it is something else,” he said at the time.

Eintracht’s fans are renowned across Germany for their passion and loyalty – Paciência’s words have not been forgotten. The Portugal man took to social media earlier this week to clarify his stance, suggesting that a poor translation was the cause of the “misunderstanding” as he looked to make amends with Die Adler faithful.

While many responding supporters cast doubt on the explanation, the Eintracht fans have a reputation for fiercely defending their team. Paciência will be given his opportunity for a reprieve, although it is uncertain how big a role he will play as new coach Oliver Glasner looks to rebuild the attack following the departure of fellow Seleção forward André Silva to RB Leipzig this summer.

Eintracht’s third pre-season match took place on Tuesday, with Paciência given his first start back in club colours. He responded with a goal in their 6-1 win over Giessen, although he was withdrawn before half time as a precaution after taking a knock, in consideration of his history.

Paciência turns 27 in August; prime age for a centre-forward. Having been highly-rated in his homeland, to the extent that some in Porto felt he was underused ahead of the move to Germany, there is still time for the two-time Portugal international to develop into the player many had hoped.

With a little luck with injury and the benefit of the doubt from his supporters, it may just be his time.