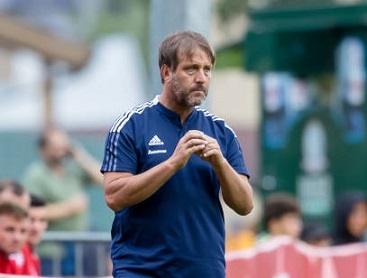 Greek champions Olympiacos are out of the Champions League at the 3rd qualifying round after a penalty shootout defeat to Ludogorets in Bulgaria.

The first leg ended 1-1 in Piraeus last week and a 2-2 draw in Razgrad on Tuesday evening would traditionally have seen Olympiacos through on away goals. However, the deciding rule was abolished ahead of this season and instead the sides contested a penalty shootout in which the hosts emerged victorious.

The changes in how two-legged ties are decided has been a heavily documented story this summer, and Olympiacos coach Pedro Martins expressed his support for the new system ahead of the second meeting. “I said many times that I am in favour because it makes it more competitive and the game is more interesting,” he said earlier this week.

Olympiacos came into the return meeting having underwhelmed as favourites in the first leg, where they required a n 87th-minute equaliser from Aguibou Camara just to salvage a 1-1 draw in Greece. Martins’ side sold goalkeeper José Sá to Wolverhampton Wanderers last month and talented 18-year-old ‘keeper Konstantinos Tzolakis was perhaps at fault for allowing Kiril Despodov’s free-kick to beat him for Ludogorets’ goal.

Proceedings began in far more positive fashion for Martins’ side in the return leg, with Olympiacos taking going ahead after half an hour in Razgrad when Yann M’Vila swept in Giorgos Masouras’ cross to give the visitors a half-time lead. However, the teams were back on level terms when Portuguese defender Rúben Semedo turned the ball into his own net three minutes after the re-start, levelling the tie at 2-2 on aggregate.

With Olympiacos no longer maintaining the advantage of a potential second away goal, the home side pushed to increase their lead and did so on 57 minutes when Thanasis Andoustos fouled Despodov and Cypriot striker Pieros Sotiriou calmly slotted home the subsequent penalty. Olympiacos got back on equal terms after a prolonged stoppage when a high-boot challenge was punished with another penalty and Moroccan Youssef El-Arabi made it 2-2 on the night.

A red card for Olympiacos’ Ousseynou Ba with five minutes remaining meant Greece’s champions were forced to consider penalties a reasonable route to progress ahead of extra time. There were no further goals during the additional 30 minutes, and in the deciding penalties veteran Frenchman Mathieu Valbuena blasted his shot over the bar early on as Olympiacos were beaten 4-2 in the shootout.

“Today, I think we are saddened as a result of being knocked-out,” said former Vitória de Guimarães boss Martins after the match. “We made a really poor start in the second half and conceded two goals. In that period, we played extremely bad and were given a lesson. It is our fault we lost the tie.

“[Now] we have to react. We failed in our Champions League objective, but our eyes are now set on our new one, the Europa League. Our players have the strength to overcome this. We must focus on our new target; we must react and see things as they now are. We can only move forward if we are serious and focused.

“We have a great team; we are provided with the best conditions to work. We are here to win and get good results. In tough times, we have the will to react. We can all see that unless one works hard, one will not achieve their goals.”

Olympiacos will now enter the Europa League at the play-off stage. Despite winning the Greek Super League last season and being the author of numerous impressive results in continental competition, Martins’ side are still not guaranteed to be playing European football during the upcoming season.