Is a move away from Manchester City right for Bernardo Silva? 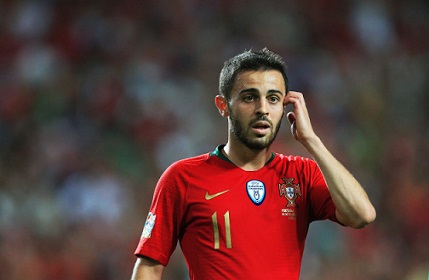 Man City midfielder Bernardo Silva was heavily linked with a move away from the Etihad this summer. The Portuguese midfielder has been a regular under Pep Guardiola since arriving from Monaco in 2017 for £45 million. Silva has made over 200 appearances for the club, scored 35 goals and provided 44 assists.

However, the 27-year-old seems to be pushing for a move. In recent weeks, Silva has been linked with AC Milan, Barcelona, Atletico Madrid and Arsenal. He ended up staying in Manchester when the transfer window closed, but his vibrant performance for Portugal on Wednesday against Ireland suggests he may be better off where he will be better appreciated.

The arrival of Jack Grealish appears to have unsettled Silva as the competition for midfield places at City has increased, upsetting the Betting on Football odds, however Silva is also looking for a new challenge at a club where he could become the star player.

One of the reasons Silva may be right to leave City is because of the increasing personnel occupying midfield positions in the club. The Citizens signed Jack Grealish earlier in the window for £100 million from Aston Villa.

The arrival of the English midfielder adds to Guardiola’s squad depth in midfield. But with İlkay Gündoğan, Kevin De Bruyne, Fernan Torres, Phil Foden, Riyad Mahrez and Raheem Sterling all tussling for places in the attacking midfield positions, Silva may find himself falling down the pecking order at the Etihad.

During the 1-0 Community Shield loss to Leicester, Silva only came on for the last 18 minutes of the match. Instead, Guardiola opted to play youngsters Cole Palmer and Samuel Edozie ahead of the Portuguese playmaker.

In the Premier League this season, Silva was named an unused substitute during City’s 1-0 loss away at Spurs during their opening fixture. Instead, Guardiola fielded Grealish, Gündoğan, Torres, Mahrez and Sterling ahead of the Portuguese midfielder in his preferred 4-3-3 formation.

Silva returned to the starting line-up for the Citizen’s 5-0 victory over Norwich in the next match. Although the 27-year-old did not contribute to the goals, he put in a solid performance and played the whole 90 minutes with Mahrez, Grealish and Torrest subbed instead. He then played under an hour in the 5-0 win against Arsenal.

Guardiola, therefore, still wants to retain Silva. However, the midfielder may not be content with squad rotation with so much competition in his preferred position. This could lead to Silva’s departure from the Etihad as he looks for consistent game time.

Since joining City in 2017, Silva has become a key player, held in high regard by Pep Guardiola. Over the last four seasons, the Portuguese midfielder has played over 30 Premier League matches per season. In the 2020/21 season, Silva was also instrumental in City’s run to the Champions League final. He started all 13 games for the Citizens in Europe, made two assists and scored one goal.

Silva is reportedly ready to end his chapter at Man City and seems more willing to push for a move away from Manchester. His agent, Jorge Mendes, recently explained that he and the club are working to find the best solution for Silva and the club, which would allow him to depart the Etihad without any impact on City.

Silva currently has four years left on his contract at City. Therefore, the club would need a decent fee to allow him to leave Manchester. This could prove to be a potential stumbling block.

Guardiola and the City hierarchy now seem content to let Silva go for a sizeable fee. Earlier in the transfer window, the Citizens wanted to offer Silva and a transfer fee for Spurs forward Harry Kane. However, Silva was not interested in the transfer to North London, which ultimately ended with Kane committing to Spurs recently.

Ultimately, City needs the funds from selling Silva before they bolster their squad further before the transfer market ends. A potential move for Ronaldo from Juventus is the latest rumour, but the deal may hinge on Silva’s decision.

For Silva, if he will not get the same game time at the Etihad as in previous seasons, a move seems the right call. At the age of 27, and still at the peak of his career. Silva will have plenty of options, and he has the potential to add to his three Premier League titles, four EFL Cups and his Ligue 1 honours. If Silva does leave the Etihad this summer, it could prove to be a win-win for him and City. The club could command a sizeable fee, and Silva will be guaranteed suitable game time with a new team.

Send him to the Wolves

Mateus.M
This comment was minimized by the moderator on the site

Mateus.M
There are no comments posted here yet