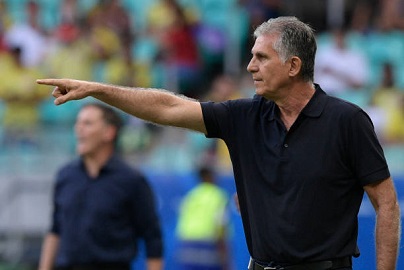 Egypt will be the sixth national team led by Queiroz during his career, having also held the manager position with Portugal (twice) as well as United Arab Emirates, South Africa, Iran and Colombia.

Queiroz replaces Hossam El-Badry, who was fired on Monday after a 1-1 draw at Gabon in World Cup Qualifications, and is expected to arrive in Cairo on Monday. The veteran Portuguese has been out of work for around nine months since leaving Colombia after a poor run of results last December.

“It is with great pride, gratitude and ambition that I accept the honourable invitation of the Egyptian Federation to the post of national football coach,” Queiroz said in his statement on Wednesday. “I want to express my commitment to the best use of my experience and knowledge, to achieve the goals and dreams of such a prestigious country of football, with such passionate and dedicated fans.”

Queiroz will have a busy start to life in his new job, with Egypt scheduled to play four more World Cup qualification games before the end of the year, before heading to Cameroon to take part in the African Cup of Nations in January. Egypt is the most successful nation in the competition’s history but have failed to win the last five editions.

The nature of Queiroz’s contract were not revealed but 2022 promises to be a busy year for Egypt with the African Nations Cup coming in the same year as the World Cup in Qatar.

I think of different words when I think of Queiroz.