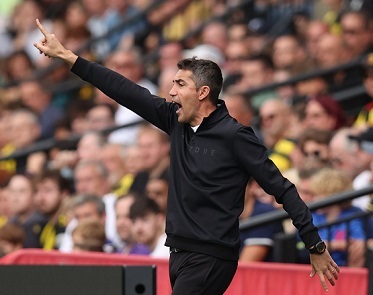 There were contrasting fortunes for Portugal’s two Premier League bosses on Saturday, as Bruno Lage won in the English top flight for the first time with Wolverhampton Wanderers on the same afternoon that Tottenham Hotspur, led by Nuno Espírito Santo, lost their 100% record.

Wolves scored twice in the final 16 minutes to earn a 2-0 win at Watford, giving Lage a long overdue win after three straight defeats since taking charge. Meanwhile in the capital, Nuno’s Spurs collapsed spectacularly in against London rivals Crystal Palace, conceding three goals in the last quarter of an hour to lose 3-0 at Selhurst Park.

Spurs’ performance at Palace in the early kick off was the subject of much criticism, even before the odds turned further out of their favour when defender Japhet Tanganga was sent off for a second yellow card shortly before the hour mark. Nuno’s men were then punished with a penalty award after Ben Davies handled the ball and Wilfred Zaha converted to give Palace a 74th minute lead.

Debutant substitute Odsonne Edouard then emerged from the bench to score a late brace, consigning the visitors to a humbling defeat to add to a poor showing as their perfect record was wiped out. Speaking after the match, Nuno admitted his side had fallen short in terms of their performance, meaning much work ahead on the training ground.

“We didn’t play a good game,” stated Nuno. “I thought it was going to be tough here, but we didn’t perform as we showed before, and, honestly, I believe we should be much better.

“There were too many obstacles during the game, always trying to find solutions, so it was tough day for the boys, and after going down to 10 men, it becomes much harder. We have to analyse it but we have a lot of work to do.”

“We showed resilience when we were a man down, bodies in front of the ball, but then came the penalty. We didn’t create enough, didn’t have the ball enough, made mistakes... there are a lot of things we have to work on.”

🎙 "We didn't create enough, we didn't have the ball enough and we made mistakes."

Better fortunes for Bruno Lage’s Wolves, who saw their wait for points – and goals – finally come to an end with victory at Vicarage Road. Once again Wolves had the better of possession, recording 56% share of the ball, but their wait for a first Premier League goal of the season finished with an own goal 15 minutes from time when Francisco Sierralta turned the ball past Watford goalkeeper Daniel Bachmann.

Substitute Hwang Hee-Chan was introduced by Lage in the second half and the Korean put the seal on the victory with a debut goal in the 83rd minute. Six Portuguese featured for Wolves on the day, as Lage started goalkeeper José Sá, with Nélson Semedo, João Moutinho, Rúben Neves and Francisco Trincão all taking their place in the line-up, while Daniel Podence came on in the second half.

“A good victory,” Lage told the club’s media after the game. “I think it is a continuation of the work we did in the first three games. We started the game well, creating chances once again. At half time we just continued to give the players confidence because the way we’re creating chances the goals will come and the victories will come.

“So happy for this one but now we’re preparing because we need more points and more victories. For that we need to continue the way we have been playing. The players are working very hard and they deserve this victory and the fans for how they support us deserve this victory.”