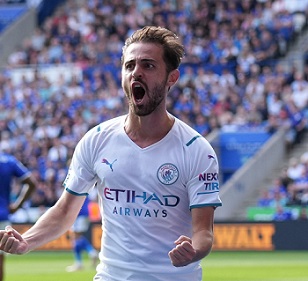 Bernardo Silva is demonstrating signs that he may be recovering his best form with Manchester City, after a winning goal and eye-catching performance in their victory at Leicester City on Saturday.

Bernardo scored the only goal of the game in the 62nd minute at the King Power Stadium, giving City their third straight Premier League victory. After the match, boss Pep Guardiola praised the impact of the former Benfica man, who was named Man of the Match playing alongside compatriots Rúben Dias and João Cancelo.

“He played really well the last two games,” Guardiola said. “I am pretty sure [he can have a big season]. It is not always the quality he plays with, he has an incredible work ethic. We are happy he is here and in the future we’ll see what happens.”

The best of the action from our win at the King Power Stadium! 🎥

Bernardo himself was keen to emphasise the importance of the team maintaining their performance level, as the Champions League begins in midweek and City prepare to meet PSG, Chelsea and Liverpool in the space of a week at the end turn of the month.

“Yeah it was the perfect way to start an important month,” Bernardo told City’s media. “The last three games before this we played well, today again. We have to keep up the momentum, winning and winning and winning, when you’re in this kind of form it’s always easier to keep things going because everyone has a lot of confidence. We have a lot of players hungry to play minutes. Everyone is ready.”