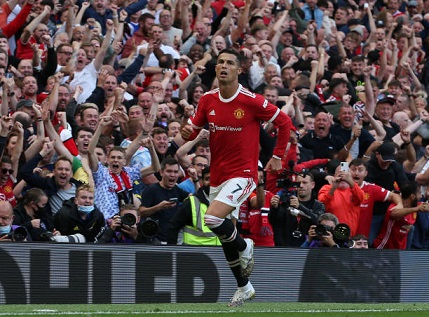 Cristiano Ronaldo described his first match back in the colours of Manchester United as “unbelievable” after scoring twice in a 4-1 win over Newcastle United to send the Red Devils top of the Premier League.

Ronaldo twice put United ahead at the Theatre of Dreams on his comeback, after which fellow Seleção star Bruno Fernandes scored a sensational long-range goal to cap a perfect afternoon for the Portuguese duo.

United fans packed Old Trafford for the occasion, with many remarking that the atmosphere for Ronaldo’s return 12 years after leaving for Real Madrid was the most electric it had been since Alex Ferguson retired in 2013.

Having made his intentions to start clear in a recent interview, Ronaldo was duly thrown straight into the United line-up by manager Ole Gunnar Solskjaer.

The home side required patience to make the breakthrough against a Newcastle side clearly motivated by the prospect of spoiling the party. Ronaldo’s moment came in first-half stoppage time, when he showed his goalscoring instincts by being the quickest to read and react to Mason Greenwood’s shot, which was spilled into his path for a simple finish by goalkeeper Fredrick Woodman.

Newcastle remained competitive and drew level ten minutes after the re-start through Javi Manquillo, but Ronaldo soon restored United’s lead. This time the Portugal captain’s run made a good passing angle for Luke Shaw, who threaded the ball through into his path and Ronaldo took a sublime first touch to set himself for a low finish past Woodman.

Ronaldo’s goals sent the full house into raptures, but the United fans soon began to chant the name of his countryman Bruno Fernandes, as if to reassure the midfielder that he remains their “Portuguese magnifico”. The former Sporting man responded by scoring a spectacular third, receiving possession outside the box and smashing the ball into the top corner.

Fernandes was substituted, as were youngsters Mason Greenwood and Jadon Sancho, but Ronaldo remained on the pitch to soak up the full experience. Jesse Lingard, who replaced Fernandes, put the final touch on the afternoon’s work with a lovely finish to cap a slick move involving Anthony Martial, Donny van De Beek and assist-machine Paul Pogba.

“I belong to this club”

Speaking after the match, a beaming Ronaldo spoke to all the major news outlets. “Unbelievable! I didn’t expect to score two goals, I expected only one,” he laughed. “It was an unbelievable welcome that this crowd gave me. The supporters sung my name all game, so I was very nervous, but I belong to this club so I want to help the team achieve great things and I’m looking forward to the next games.”

Manager Solskjaer described Ronaldo as a “real team player” and revealed the returning hero had made a speech to the United players ahead of the game, in place of the usual singing initiation which commonly takes place. Ronaldo confirmed the sentiment of his coach, saying: “Varane and Sancho sung, and I sung 18 years ago so last night I didn’t sing, but I gave a little speech to thank them for welcoming me and telling them we have fantastic potential to build confidence and be where Manchester deserves: step by step we have to win the Premier League.”

A few days ago I talked about the importance of having fast wingers that can dribble. If there’s any more proof of this than all you need to do is look at this Man U team around Bruno and Ronaldo. 4-2-3-1 is what Ole went with but the key here is...

A few days ago I talked about the importance of having fast wingers that can dribble. If there’s any more proof of this than all you need to do is look at this Man U team around Bruno and Ronaldo. 4-2-3-1 is what Ole went with but the key here is Man U has Jadon Sancho and Mason Greenwood on the wings, both of them are rapid and they can take defenders on 1 v 1 with ease. Jota/Guedes and Bernardo/Trincao aren’t like that.

All you have to think about if you’re questioning my ideas about having fast skilled wingers is this…what were most of our fears about Joao Cancelo before the Euros?? We were afraid that he wasn’t a great defender particularly in 1 v 1 situations and similar to Semedo who was exposed against Munich when he played for Barcelona. Cancelo and Semedo scared us because they struggle with the exact wingers that we don’t currently have…think about that.

Now we have Neto and I pray that he comes back better than ever because he’s the closest guy we have with those characteristics. Our U 21s have a few guys in Leao, Conceicao and Jota who are close. Gelson Martins right now would be the best option in my opinion. This group of players firing on all cylinders in the near future is the best group of players we currently have. Where’s Bernardo? He’ll have to be benched and subbed in.

Where are Ronaldo's haters?