“I lied when I said this was not a special match” – Mourinho wins 1,000th game in management 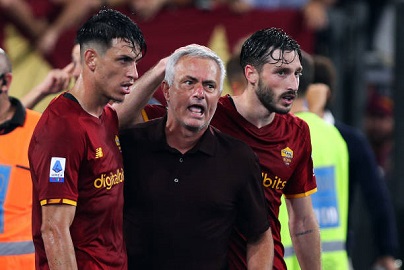 José Mourinho conducted a classic run down the touchline to celebrate Roma’s stoppage-time winner against Sassuolo on Sunday night, as the Gialorossi went top of Serie A and maintained their 100% start to the season.

Stephan El Shaarawy’s 91st-minute goal at the Stadio Olimpico gave Roma a 2-1 win over Sassuolo on a difficult evening for Mourinho’s side. Rui Patricio drew widespread praise for his performance in helping the club from the capital overcome an impressive Sassuolo side, while for Mourinho the chance to mark his 1,000th game in management with three points clearly meant more than he had previously conceded.

The former Porto boss raced down the touchline to celebrate with his players following El Shaarawy’s goal, and speaking to the media post-match Mourinho discussed the emotional aspect of taking all three points on the landmark occasion. “During the week I lied, even to myself, saying that this was not a special match. I tried to convince myself of that,” said Mourinho, who has 639 wins from his 1000 matches.

José Mourinho celebrating after a 92nd minute winner from El Shaarawy… on his 1000th game as professional manager. 🔴🇵🇹 #Mourinho

“It was a special match, with a special song for me. I wanted to remember it for the rest of my life. I didn’t want to lose. The game could have ended in 6-6 or 7-7, they could have won 2-1 just like us.

“Rui Patricio made two or three incredible saves for us and we also missed two chances for an empty goal. Today I didn’t feel 58 years old, I felt like I was 10 years old. I ran like a child after the 2-1.”

To cap off a riveting end to proceedings, Sassuolo responded to the goal by launching an attack and putting the ball past Patricio for an apparent equaliser. However, the linesman’s flag saved Mourinho’s moment and Roma ensured they top the table after three rounds of action.