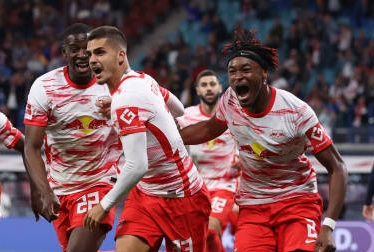 André Silva has endured a difficult start with RB Leipzig since his high-profile summer move from Eintracht Frankfurt, with the Portugal striker even losing his place for recent matches.

However, Silva has staked his claim for a recall with a sensational substitute appearance to change the game for Leipzig in the Bundesliga on Saturday. The former Porto man emerged from the bench with the score at 0-0 against Bochum on 69 minutes and scored with his first touch before moments later getting the assist for a second goal.

Leipzig have had an erratic start to the season as they adjust to major changes, including the departure of highly-rated coach Julian Nagelsmann to Bayern Munich, central defensive pair Ibrahima Konate (Liverpool) and Dayot Upamecano (Bayern) as well as influential midfielder Marcel Sabitzer who also joined champions Bayern.

Silva was dropped towards the end of last month as the team went four matches without a win, having only scored once from the penalty spot since his arrival. With the match on Saturday against Bochum heading towards a stalemate with a little over twenty minutes remaining, the Seleção man was called from the bench and made an immediate impact.

With his first touch, Silva headed Leipzig ahead from a corner for his first goal from open play for the Saxony club. Just a few minutes later Silva turned provided, receiving possession and playing a perfect throughball for Christopher Nkunku to finish expertly. Mkunku then added a third to make it a welcome second consecutive home league win and a good response following a Champions League defeat to Club Brugge in midweek.

“An outstanding person and footballer”

“André Silva is an outstanding person and an outstanding footballer,” Leipzig coach Jesse March said after the match. “I can only say positive things about him. Unfortunately, it didn't go as he had imagined at first. But we have always believed in him and continue to believe in him. He scored a goal and provided an assist today - that was a very important moment for him and for us.”

For his part, a clearly delighted Silva spoke to the media, saying: “Of course, I'm very happy with my goal and above all the fact that I could help the team. It was a bit easier after the first goal as Bochum were forced to loosen up more, which gave us more space and security for our play. It was important that we remained focused and aware today. We absolutely wanted these three points!”

Leipzig move up to 7th in the Bundesliga ahead of the international break, after which they return with a trip to Freiburg before starting a Champions League double-header against Paris Saint-Germain by heading to the French capital.