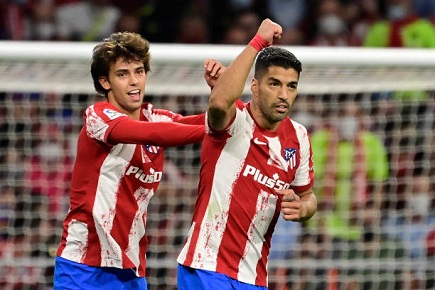 La Liga champions Atletico Madrid added to Barcelona’s woes on Saturday with a convincing victory in the Spanish capital.

For Portuguese followers, the performance of João Félix was particularly pleasing. The former Benfica man earned glowing praise for his showing, particularly in the first half, as he caused Barca numerous problems with his dribbling and passing.

Thomas Lemar and Luis Suarez scored first-half goals to set Atleti on the road to victory. Félix ultimately played 72 minutes at the Wanda Metropolitano, working in tandem with frontman Luis Suarez, and the display is regarded as his most promising so far this season.

Coach Diego Simeone was questioned about the Portuguese’s contribution and if it was Félix’s best game in recent memory. “Chelsea away was also good,” replied the Argentine. “When the first half was over I told him “what you’re doing is what I need from you’. Hopefully he continues in this line, he is decisive when he turns. His quality is speed, change of rhythm, explosion. He unbalances teams with his control.”

Félix was asked if consistency is his biggest target this season. “Last year I think I would have had regularity if it weren't for the injury,” he said. “Now I want to be consistent and for that I have to play every game, I want to play as a starter so that I can show it better.

“The goal was missing”

“All footballers want to play every game and have continuity. We have to do our job and it will be the coach who decides. There are many of us for few positions. We are all great players, competitiveness is great and it is difficult for the coach to choose, that is why it is changing.

“We knew that Barcelona leaves us space to play. They are not having a good time, but it is Barcelona and in any game they can change things. We had a lot of space, we knew that if I had the ball and turned, we would have chances.

“I feel good. [Simeone] told me at half time to keep doing what I was doing in the first half. I am happy with my game and with that of the whole team. I was good, but the goal is missing. I think people enjoyed it, but I want to continue.”

Félix is not part of the Portugal squad for upcoming matches against Qatar and Luxembourg, but the 21-year-old looks a good bet to start Atletico’s next match at Granada after the international break, which is followed by a home meeting with Liverpool in the Champions League.