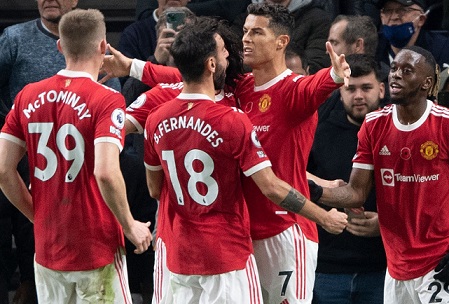 Manchester United bounced back from their disastrous defeat to Liverpool last weekend with a Cristiano Ronaldo inspired victory over Tottenham Hotspur in the capital. Bruno Fernandes was also a key figure in the Red Devils win, but the result appears a damaging one for the prospects of Nuno Espírito Santo.

The Spurs boss was loudly booed for his decision to substitute Lucas Moura during the second half and the poor nature of the home side’s performance led to growing speculation on Sunday evening that the Portuguese could be set to lose his job after just four months at the club.

Remarkably, Ronaldo joined Nuno in preparing for the match under scrutiny in the media. Despite a return of 6 goals in 8 starts since returning to Old Trafford, the Seleção captain has seen many in the British press question his transfer and some journalists had even suggested Ronaldo be dropped for the trip to London.

With United boss Ole Gunnar Solskjaer and the Red Devils supporters not buying into the provocation from the tabloids, there was never any realistic prospect of Ronaldo not starting against Spurs, and shortly before half time the Portugal man exposed the senselessness of the call for him to miss out.

Fernandes was the provider, dropping a perfect cross to the back post onto the right foot of Ronaldo, who connected with a superb volley across Hugo Lloris to give United a 1-0 lead. Ronaldo thought he had doubled his team’s advantage early in the second period, but his thunderously unforgiving finish was disallowed for offside.

The @Cristiano brilliance as Man Utd won at Spurs pic.twitter.com/CHZ3jkALlk

In the end, Edinson Cavani was the man to make it 2-0 after more great work from United’s Portuguese duo. Fernandes’ pressure won possession in midfield and Ronaldo cut inside to evade the challenge of Oliver Skipp and find Cavani for the Uruguayan to finish expertly. The win was sealed by substitute Marcus Rashford, who replaced Ronaldo as Solskjaer’s thoughts turned to Tuesday night’s match against Atalanta in Italy.

“We had a tough week,” Ronaldo explained to Sky Sports. “We had a result that we didn’t expect [against Liverpool] and the team was a little under pressure, a little sad. But today we gave a good answer, we played good and started the game very well.  Of course it’s my job to help the team with my experience, with goals and assists. I feel so pleased for that but in terms of the team the performance was unbelievable.

“We didn’t expect the recent results in the Premier League, but I hope we have turned the page. Everyone has a role in the team, not only the coach. It’s normal because the club is so big that the criticism is always there. It doesn’t bother me because I have played football for 18 years and I know that one day it’s perfect and another day we are crap. We have to deal with that. It’s always better when people praise you, but in life you have to go through bad moments.” 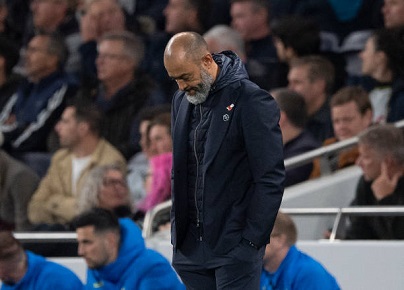 “We are not on the right track” - Nuno

On the other end of the result was Spurs manager Nuno, who was faced with widespread criticism of an abject display. When the former Porto and Wolves started the campaign with three consecutive 1-0 victories, many felt the early season points total flattered a Spurs side riding their luck – the recent drop-off in results was inevitably going to see the Portuguese under fire.

Reports emerged on Sunday of a board meeting at the club to discuss Nuno’s position, with some outlets with links to the club suggesting the decision is likely to be that a change is made. Fellow Portuguese coaches Paulo Fonseca and Sérgio Conceição have been linked with replacing Nuno, who appears to be clinging to his job at present.

Speaking after the match, the manager was typically honest. “Poor performance, bad performance. There aren’t too many words, simply that we didn’t play good – Man United was stronger than us. We conceded in a poor way; we lost balls; we allowed counter attacks; we were not able to really break them.”

With audible fan displeasure during the match, Sky asked Nuno how he could assure supporters the team is on the right track. “We’re not on the right track. We totally understand the criticism; it’s part of football. When the team doesn’t perform the fans suffer, the fans are not happy and they show they are not happy. We have to take it, keep on trying and in a humble way ask them to support us.”

On Monday morning Tottenham Hotspur officially announced Nuno and his coaching team “have been relieved of their duties”.