“I needed this” – Portugal’s Bruma flying high with PSV [video] 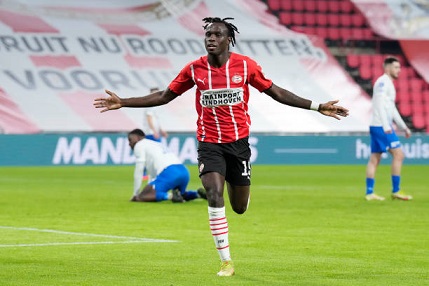 Bruma is proving a surprise package for Dutch giants PSV this season upon his return from a loan spell with Olympiacos last year. The former Sporting man scored his 6th goal of the campaign at the weekend against Vitesse in the Eredivisie as PSV cruised to a 2-0 win to stay level with Ajax at the top of the table. To have a wager on Bruma and PSV continuing to thrive, visit Betminded.com for the best odds.

Having scored a brace against Fortuna Sittard ahead of the international break, Bruma kept his place for the meeting with Vitesse on Saturday at the Phillips Stadium. His goal in the 30th minute put PSV 2-0 up, and it was a memorable strike on the volley from just inside the area following a cushioned header by on-loan Benfica man Carlos Vinicius.

Bruma now has five goals in the league despite only starting 5 matches, while the 27-year-old also scored in the Champions League qualifiers against Midtjylland in Denmark. Therefore, Bruma is now PSV’s leading scorer and has already exceeded his total from his first season in the Netherlands in 2019-20.

It is a welcome upturn in fortunes for Bruma, whose career seemed to have stalled after promising so much as a young star at Sporting. His electrifying performances for the Lisbon club and for Portugal’s youth teams saw him snapped up at an early age by Turkish giants Galatasaray. Injuries and a failure to truly settle held him back in Istanbul, and he was loaned to Spanish side Real Sociedeade before moving permanently to RB Leipzig and then on to PSV. Another loan saw him at Olympiacos last season before settling at the Dutch club. In all his travels he has shown flashes of brilliance, but only now at PSV does Bruma appear to have added consistency to his game.

Bruma - what a strike! pic.twitter.com/IZQD0NFhOJ

“I needed this, but the most important thing is that we win,” Bruma said after the match. “Being top scorer is nice, getting three points is nicer. Competitions like these give me a lot of confidence. I often play like this in training, and I know I can do it.

“I did not expect it to go so well. The coach and the staff are very helpful to me. Now I am in a very nice situation, and I can do what I like to do: play for PSV, score goals and win matches.

“It is difficult to maintain this level, but I will continue to focus on training. I will always do my best. In the coming weeks I only hope to get better and of course to play a lot.”

Next up for PSV is a home match against Sturm Graz in Group B of the Europa League, where a win is much-needed to put pressure on leaders Monaco and Real Sociedad.

Good to see Bruma doing well. Lost sight of him after Turkey I think.

Football should be considered a prime national asset in Portugal. If performance and profits cant be maximised then sell the lot to someone who can. Lot of money to be made...

Good to see Bruma doing well. Lost sight of him after Turkey I think.

Football should be considered a prime national asset in Portugal. If performance and profits cant be maximised then sell the lot to someone who can. Lot of money to be made people want to see Ronaldo's birthplace, fill the Algarve with poker machines to pay for it.

It's crazy there's a third of a top league playing abroad.

Read More
Bruno Beira
There are no comments posted here yet