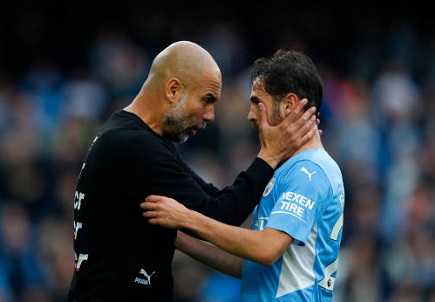 There have been few better players in the first third of the English Premier League season than Bernardo Silva. Having been linked with a move during the summer, the Portuguese midfielder has enjoyed a resurgence with Manchester City, where he is once again regarded as a vital component of the champions’ side.

Bernardo scored again at the weekend as City brushed aside Everton 3-0 at the Etihad Stadium, making it three goals in his last five league appearances. Already over halfway to his personal best tally since moving to England, the former Benfica man’s intelligence, industry and effectiveness have all returned to a high level in his fourth season in Britain.

Doubts had been cast over Bernardo’s future in the summer, as speculation mooted a possible change of scenery and a new challenge for the 27-year-old. However, the Lisbon man ultimately stayed with City, where he is immensely popular with the club’s fans, and the decision has proved inspired.

“Right now, he’s undroppable because of what he is doing on the pitch,” Guardiola said last week. “What he has done this season – it is difficult to find in Europe, in the world, a player like him right now.”

For his part, Bernardo has been reflecting on a highly successful four years with City. A crucial part of the story which took him to Manchester was his displays for Leonardo Jardim’s Monaco in knocking City out of the Champions League in 2017, after which Guardiola’s men were keen to secure his signature.

“Those two matches changed the course of my career,” Bernardo said on Monday.

“I saw Pep outside at the mixed zone where we were both giving interviews and he came up to me and said, ‘Congratulations on the match’.

“It was that tie that made me want to play in the Premier League and at the end of the season, City asked me if I wanted to come and so it was a dream come true – and it was an easy answer.”

Since then, there is little doubt that Spanish coach Guardiola has been essential in helping Bernardo develop his game. Speaking after his goal against Everton at the weekend, the Portuguese detailed how his manager has helped him understand all aspects of the game.

“It took me some time to adjust to my new team-mates. It was a new style of playing, a new city and a new league, but Pep’s demands when I first arrived were something I really liked.

“Sometimes the team needs to speed up the game and having a coach like Pep, who likes to control the rhythm of the game by dominating possession, drives us all to win every year.”

The confidence showed in the loss to Serbia. Critics can mock Guardiola all they want, but 2 of our top 4 in form players play for him and have grown under him. Dias has regressed a bit, otherwise I'd say three players.

For those who remember, 2017 Monaco coached by Jardim had;

So much fun to watch Monaco those...

For those who remember, 2017 Monaco coached by Jardim had;

So much fun to watch Monaco those Jardim years.

Guardiola gets entirely way too much credit for Bernardo, it was at Monaco with Jardim where we saw Bernardo change from an ultra talented dribbler (ignored by JJ) to a world class player. He essentially went to City as a near completed package....

Guardiola gets entirely way too much credit for Bernardo, it was at Monaco with Jardim where we saw Bernardo change from an ultra talented dribbler (ignored by JJ) to a world class player. He essentially went to City as a near completed package.

What Sir Alex did with Ronaldo is what Jardim did with Bernardo. We never give Manuel Pellegrini credit for Ronaldo so why does Guardiola get this credit? The arrival of Joao Cancelo also helped Bernardo, he changed completely when on with his good friend.

I will give the City fans credit, they did stick with Bernardo all over YouTube when he didnt start, always asking why Mahrez (glass canon) was playing over Bernardo, good on them.

If the great Fraudiola gets praise for "making Bernardo", should he not get equal criticism for failing to make anything of:

If the great Fraudiola gets praise for "making Bernardo", should he not get equal criticism for failing to make anything of:

The great Fraudiola gets to pad his made up resume on the backs of the world's best or richest teams.

How about taking a stroll down to Tottenham and see if he could even finish in the top half of the EPL? I bet he wouldn't.