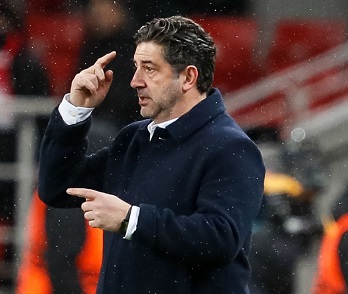 Under-pressure Spartak Moscow coach Rui Vitória led his side to an impressive 2-1 victory over Italians Napoli in the Russian capital on Wednesday, giving Spartak genuine hope of progressing from a tough group in the Europa League.

Vitória has seen question marks over his future owing to a five-match winless run in the league, but Spartak’s European campaign is proving somewhat of a saving grace for the former Benfica boss. An early brace from Alexander Sobolev proved decisive in beating Napoli, sending Vitória’s men temporarily top of Group C.

Spartak have three more Premier League matches before embarking on a winter break which lasts over two months. While Vitória has been considered safe in his job until the midway point of the season, many expected him to depart next month unless there was an upturn in fortunes both in the league and continental competition.

The win over Napoli, which secured a double over the Serie A side following September’s 3-2 win in Naples, was again the subject of an incident involving the opposing coaches when greeting each other. Napoli boss Luciano Spalletti refused to shake Vitoria’s hand at the end of the game, instead heading to the dressing room as the Portuguese looked on in surprise.

Rui’s face at the end says it all 😎 pic.twitter.com/visdIEJwIO

“He didn't greet me before the game,” Spalletti explained. “When you receive a guest you should greet him right away, not just at the end of the game after defeating him. We were ten meters away and he didn't greet me. In situations like this I'll always shake hands with the opposing coach.”

“It’s not true,” replied Vitoria. “I always respect the coaches of my opponents. Before the game, I went to the Napoli bench, greeted everyone, but Spalletti was not there. And then the match began.”

It is not the first time the pair have involved in handshake drama. During the first meeting at the Diego Maradona Stadium in Italy, Spalletti appeared to require assistance in identifying his opponent before the game.

The victory for Spartak sees them move top of the group ahead of Leicester City hosting Legia Warsaw on Thursday in the other clash of Matchday 5. Spartak are guaranteed to go into the final game – away against Legia Warsaw - already occupying a qualifying place.

“We won an important victory [today] over a very strong rival - one of the leaders of Italian football,” Vitória continued. “Our team was excellent in terms of tactics, competently closed the zones and created chances. In the second half, Napoli gave us a lot of problems, but in the end we held out and coped.

“Why don’t we play the same way in the Russian championship? We ourselves are trying to find the answer to this question. Somewhere there is not enough freshness due to a difficult schedule, also it’s about emotions. And sometimes bad luck. We will try to keep the positive that was today and play more consistently.”

Stand up guy, no doubt Spalletti just blowing things out of proportion.

Good for you Vitoria

Nunogomes21
There are no comments posted here yet