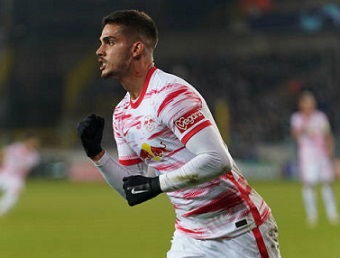 Two of Portugal’s top marksmen were on-target in the Champions League this week, with André Silva joining Cristiano Ronaldo in showing his best form in Europe’s premier club competition.

Ronaldo was again decisive on Tuesday as manager-less Manchester United booked their place in the knockouts with a 2-0 win at Villarreal, while Silva got on the scoresheet the following evening as RB Leipzig hammered Club Brugge 5-0 in Belgium.

United, who sacked coach Ole Gunnar Solskjaer on Sunday following their disastrous 4-1 defeat to Watford, appointed Michael Carrick as caretaker manager for their vital trip to Spain. Needing to avoid defeat for the best chance of qualification, Carrick opted to drop Bruno Fernandes for the match at El Madrigal.

An uneventful contest looked to be heading towards a goalless draw until Ronaldo broke the deadlock on 78 minutes with a clever lofted finish. The Portugal captain then played a part in the second, picking up a loose ball inside his own half and instigating a move which ended with substitute Fernandes feeding Jadon Sancho for the Englishman to score his first goal for the club.

Here’s Ronaldo - the penalty box merchant - tracking back inside his own half in the last minute of play, to win a loose ball and instigate the second goal.

Such a tactical headache, this guypic.twitter.com/ZOuoVJuEZi

Ronaldo has now scored in each Champions League group match, netting six times in five matches. He was awarded Man of the Match for his contribution against Villarreal, while his overall record since returning to Old Trafford is an impressive ten goals from 15 starts in all competitions.

Silva on the scoresheet as Leipzig cruise

Andre Silva has also enjoyed his best form so far this season in the Champions League, and the former Porto man scored a superb header in RB Leipzig’s 5-0 demolition of Brugge in Group A. Silva scored the third goal of the night after just 25 minutes, nodding Angelino’s cross back across goal and into the far corner.

While Silva has struggled to make an impact for Leipzig in the Bundesliga since making a high-profile move from Eintracht Frankfurt in the summer, the Champions League has proved a more productive experience. Silva has two goals and one assist from four matches in the European Cup, and his side will now attempt to consolidate third place behind strong group favourites Manchester City and Paris Saint-Germain.

André Silva with a brilliant header for Leipzig pic.twitter.com/a7w9p8gLuy

“It's an incredible feeling [to score in the Champions League] so it’s always nice,” Silva said after the match. “We gave it our all from the first minute and worked hard for the result. We deserved to win 5-0. However, the whole team deserves praise for their performance. Now we have the chance to finish third and we want to take it.”