Who have been the best Portuguese performers in the English Premier League? 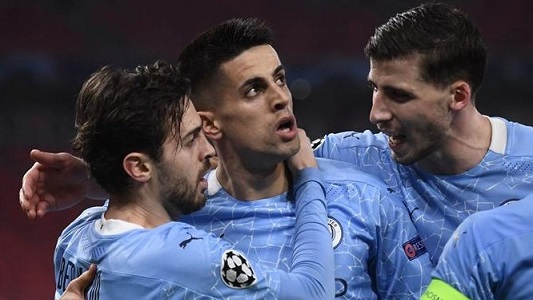 Whether we’re talking any time in the last two decades or just this season, there has been a plethora of talented footballers from Portugal in the Premier League with players like Cristiano Ronaldo, Ricardo Carvalho and Nani to name a few legendary Portuguese players. That there are many incredibly good Portuguese players plying their trade in the world’s most high-profile league is testament to the football academy set-up in Portugal, and it is three of these players that we are here to discuss today. Of all the Portuguese players in the Premier League, who has been performing above and beyond for their team?

While the likes of Rúben Neves and José Sá at Wolves, and João Cancelo at Manchester City have often been brilliant this season, there are three players in particular I would like to talk about today: Bernardo Silva and Bruno Fernandes on the blue and red side of Manchester, and Diogo Jota of Liverpool. The last one in particular is a name that continues to surprise me week in week out, as somebody who didn’t really understand why Liverpool were signing him in the first place. Safe to say humble pie has been demolished. ANYWAY! Without further ado, let's get straight into it!

Bernardo Silva’s work quite often goes unnoticed, purely because he doesn’t score a lot of goals. But without Silva, City would be a much worse team. His link-up play is always top tier, his creativity in the City team is arguably second only to De Bruyne. Although a smooth operator, Bernardo’s attitude is first-class, with an unusually high work rate and gritty edge for such a technical player. I know for a FACT City fans prefer their team WITH Silva as opposed to without him.

Bernardo has won everything there is to win with City, outside of the Champions League. In the summer there was talk of him being included in a deal for Harry Kane but in my humble opinion, letting go of Silva, especially to a direct competitor would be outrageous. It would only come back to haunt City, that’s definitely how this works right?

What can you say about Bruno that hasn’t already been said? Almost every bookmaker slashed odds on Bruno joining  United the moment his name was mentioned. It seemed a dead cert from the get-go but I don’t think even the most optimistic analysts and journalists for sports and odds would’ve guessed just how big of an impact this signing would have for Manchester United. Putting away 18 goals in his first full season in the Premier League, helping United clinch second place, lifting every other player around him, dragging them from the depths to claim points they had no right to claim. Even as a betting man I wasn’t taking a punt on United finishing second last season.

What has been crazy though is the fact United added a LOT of great players to their ranks over the summer and somehow they got worse? Now with the sacking of Ole Gunnar Solskjaer and presumably a world-class manager coming in, you can expect them to find form again. But even in the darkness Bruno has been a shining light for United. Always outperforming the players around him. Always trying to get the players around him to step their game up. Without Bruno, United would be so much worse off. What a player.

As I mentioned previously, this guy continues to surprise me every week. Still only 24 years old, he has had his injury troubles since joining Liverpool from Wolves, but Jota scored 9 goals in his first season racking up 19 league appearances for Liverpool. This season, he has 5 in 11 including a beautiful finish against Arsenal following one of the cleanest assists I’ve ever seen from his compatriot, Arsenal’s Nuno Tavares. At £40-45 million, a lot of people were sceptical of Jota signing for Liverpool, but honestly, he’s proved he was worth every penny of that and more.

For a player who is yet to scientifically reach their physical prime, which allegedly is 26, Jota is already what you could call the complete package. He’s quick, he isn’t afraid to take players on, he gets in and does the dirty work which quite often ends up in him winning free kicks in dangerous positions. He has great vision and can pick out passes very well not to mention his ability to finish, even in tight spaces. His work often gets overlooked because he lines up alongside Mané and Salah, as well as the fact the competition for his place is Roberto Firmino, it’s easy for him to go unnoticed, yet somehow he stands out in his own way.

What do you think? Do you agree that the above have been the best-performing Portuguese players in the Premier League? Are there any players you believe deserve a mention?

Joao Cancelo looks like Roberto Carlos at City, its quite amazing actually.

Daniel Podence is another guy who always plays well and also doesnt score alot but has a big impact on games.

So much talent, how do you even choose? and yet, we are struggling to qualify for the WC.