Dany Mota: Portugal U21 star finding form in Serie B talks training with Ronaldo, growing in Italy…and which Portuguese club he supports 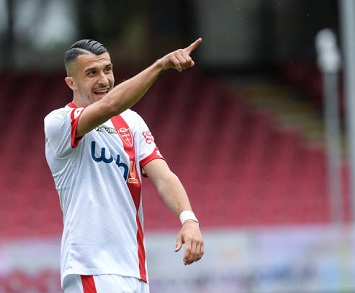 Dany Mota is in a good run of form in Italy’s Serie B with Monza, and the Portuguese youth international spoke to Italian newspaper La Gazzetta dello Sport early this week.

Born in Luxembourg, Mota has been a regular for Portugal at U21 level, where he has scored 7 times from 16 appearances for Rui Jorge’s side. The dynamic forward’s Italian adventure began when arriving at Virtus Entella at the age of 17, which was followed by a brief stay with Juventus before moving to Monza.

A modest tally of six goals in Italy’s second tier last season required improvement, and a brace in the weekend victory over local rivals Como puts Mota onto four goals from nine appearances. Clearly more of a goal threat this term, the 23-year-old reflected on his start to the season as Monza occupy a playoff position.

“[Under new coach Giovanni Stroppa] now I can be closer to the goal, before I wasn’t,” he says. “A lot has changed, even in training. It is very good and I am able to grow.

“I got injured in the final of the European Under-21 Championship, then I had another muscle problem. However, coming back like that in the derby showed that I am fine now.

“We are slowly getting there, everyone scores a bit, also because the coach often changes players and it is important for the group. We all play.”

Mota’s goal return for Portugal at U21 level inevitably increases expectation in Italy with his club, who signed him after he switched to Jorge Mendes as agent. Having competed with Mario Balotelli at times last season, Mota is expected to become a more important figure for the team nicknamed The Boys, with Gazzetta suggesting that his valuation has trebled recently.

“It’s normal, when you do well and show yourself off [for Portugal] everyone expects a lot. The important thing is to have recovered well, go on like this, but let’s be clear: two goals [at the weekend] are not enough.

“I don’t think about things [such as my valuation], they are society issues. It is normal that we talk about them, when you do well it is like this, then maybe I do not score anymore and I am worthless.

“I’m not a star. Last year was my first real year in Serie B after playing for Entella [in Serie B] and I felt a bit reserved, there were many of us. But it’s my fault, I had to score more. My goal is to go double digits. Do I get a prize? I’ll give one to myself.”

Mota wears the no47 shirt with Monza, which he says is a reference to the neighbourhood in Luxembourg in which he was raised to parents from Porto. Asked if he therefore supports FC Porto, Mota replied: “No, no – Benfica!” before he was asked about his off-field adaptation, including whether he had learned to drive.

“Yes [I have] learned to drive. I never thought about it. I had a girlfriend who took me to the stadium. Now, I’m single so I had to learn. [I live alone] in Concorezzo, I have a little dog, Oscar. He is more important than a girlfriend. And thank goodness I have a neighbour who keeps him when I go away.”

The spell with Juventus gave Mota the opportunity to share a dressing room with Portugal captain Cristiano Ronaldo. The link with Jorge Mendes came upon Ronaldo’s recommendation, and the Manchester United star left a positive impression on his compatriot during their time in Turin.

“He was perfect with me in those six months at Juve. When I arrived, he already knew me and surprised me. He transmits a winning mentality; he works hard and always wants more. In fact, in training matches when I played with him, I always won. And when I was against him, I always lost.”

Finally, Gazzetta asked about Mota’s prospects with the Seleção at senior level. The question was raised whether he would prefer to play in Serie A with Monza or the World Cup with Portugal, where there is fierce competition for places including from Mota’s Portugal U21 roommate Rafael Leão.

“Easy: to play for Monza in Serie A, as if that happens I think I could go to Qatar 2022 too. And in any case I hope we don’t get Italy in the play-offs. I’m in the mix (with Portugal) and after the European Championships they told me it’s the same path. But the competition is tough: Diogo Jota, André Silva, João Felix ... And Leão!”