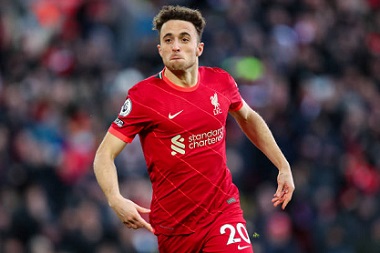 Only two players have scored more Premier League goals than Diogo Jota this season, as the Portugal forward continues to prove a reliable goalscorer in Liverpool’s title hunt. Jota struck twice against Southampton on Saturday to help the Reds reduce the gap from leaders Chelsea to two points.

Meanwhile, namesake Jota, currently on-loan with Celtic from Benfica, is also establishing himself as a star performer in the Scottish Premiership. Elsewhere, there was a superb winner for Tómané in Turkey, as well as further Luso goals in Bulgaria, Romania, Lithuania and Luxembourg.

Diogo Jota was the catalyst for Liverpool’s 4-0 thrashing of Southampton at Anfield, scoring the opening two goals in the first half. Both finishes came from close range, putting the former Porto man on seven Premier League goals for the season – only teammate Mohamed Salah (11) and Leicester’s Jamie Vardy (9) have scored more.

Such is Jota’s form that a cheeky bet for him to end up top scorer at the EPL club could pay rich dividends, as could a flutter at onlinepokiesnz.co.nz if your luck is in.

Lovely work from Sadio and Robbo, finished off in style by @DiogoJota18 👌⚽ pic.twitter.com/4OrwXNm6iq

Liverpool boss Jurgen Klopp was happy to speak extensively on Diogo Jota after the match. “A good subject to talk about,” Klopp began. “Diogo: exceptional player, exceptional boy. It was for us, one-and-a-half years ago, a perfect signing because he has everything that a Liverpool player in this squad needs. He has the technical skills; he has the physical skills, and he is very smart and can learn all the tactical stuff pretty quick.

“On top of that, he can play all three positions; in a 4-2-3-1 he could play as the 10. So, it is very helpful. He has the speed, has the desire to finish situations off really good. I think his goalscoring record is pretty impressive, if I’m right.

“Unfortunately, he had a big injury last year and that is never helpful. But he is back, thank God, and fits really well in this team. I’m really happy for him. Actually, today I thought he could have made a slightly better decision before he then scored, maybe he was smart enough to wait for the next ball that he could finish it off easier. But I thought we should have scored with the situation before already. But all good and Diogo is a good player.

Incisive build-up play and a clinical finish to match 😎 pic.twitter.com/ZTjd23osMt

“When you hypothetically talk to a player and he says, ‘Where will I play?’ – you decide about that with your performance, by the way, it’s not written in stone that we always start with the same line-up, all other players are really good in our squad as well. That should not be a surprise.

“But in the end, it’s about making 35 really good games instead of getting somehow through a season and playing 50 games. It’s completely normal that you have to get rested and all these kinds of things. For these moments you need more than 11 players in the squad – we all know that – and you need more than three strikers, even when you play with three strikers. That’s what we have, thank God. He was smart enough to see that and that’s why he made the move and that’s why he can contribute so well.”

Moving north of the border and Benfica loanee Jota built on his growing reputation in Scottish football with another goal in their victory over Aberdeen. Jota scored the first goal of the game as The Hoops ran out 2-1 winners in Glasgow to make it six victories from their last seven outings.

“We knew this was going to be a tough game,” Jota told Celtic TV. “Aberdeen have their strengths and we were looking forward to beating them, and we did it. I thought we played a good match and now it’s on to the next one.

“Some teams just play with a back five and it’s really difficult to go their defence because once you go through one, there’s always another one and another one, so we just needed to find the space, control the ball, keep possession and just finish it.

“That demonstrates our character and personality – we are a team that wants to have the ball, be aggressive and score goals – and once that doesn’t happen, we just stay calm and try to play our football, and I think most of the time that’s what happened.”

The 22-year-old has scored eight goals from 17 appearances since moving to Celtic Park, including a brilliant strike in his side’s heart-breaking elimination at the hands of Bayer Leverkusen in Germany last week.

Former Tondela striker Tómané has scored in back-to-back games for Samsunspor in the Turkish 1 Lig, after his brilliant volley earned a 1-0 win over Adanaspor on Saturday night. Former Liverpool striker Toni Gomes also scored a winner in the division, getting the crucial strike for Menemenspor as they beat Kocaelispor 2-1 away from home.

Brilliant volley finish by Tomané for Samsunspor in Turkey pic.twitter.com/6c8Xde93Fa

In other leagues, in Romania ex-Mafra defender João Miguel scored the winning goal for Arges in their 1-0 win at UTA Arad, while it was a similar story in Bulgaria with Leandro Andrade getting the only goal as Cherno More overcame Beroe. Finally, former Casa Pia forward Ivo Braz got on the scoresheet for Džiugas Telšiai in Lithuania and veteran midfielder Pedro Pinto got his side’s goal as RM Benfica were hammered 9-1 at home by Progrès Niederkorn in Luxembourg.

Jota is the real deal, he is no joke. You know what is a joke? THE BALON D'OR!

Messi gets if for doing absolutely NOTHING! FIFA is so transparent and the award should be abolished after this year. Its obvious not about futebol at all.

Jota is the real deal, he is no joke. You know what is a joke? THE BALON D'OR!

Messi gets if for doing absolutely NOTHING! FIFA is so transparent and the award should be abolished after this year. Its obvious not about futebol at all.

I think fans/supporters of Lewandowski, Benzema and Salah should be really upset. This is 100% fakeness at its highest. I believe Lewa should have got it but Salah has a good case as well.