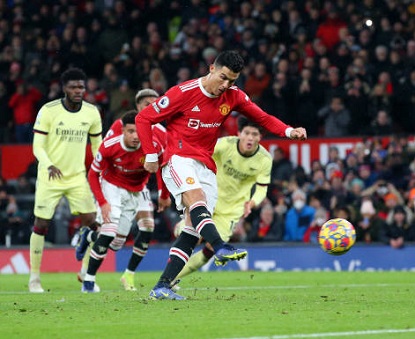 Ronaldo’s double saw him notch 801 career goals, while Bruno Fernandes ended his spell without scoring with a first-half equaliser. To cap a splendid evening for the Luso contingent in red, Diogo Dalot gave an assured performance on his first league start of the season.

United were playing their final game under caretaker boss Michael Carrick, who announced he is leaving the club altogether as new interim coach Ralf Rangnick begins his role. With a banner saluting recently-sacked manager Ole Gunnar Solskjaer unveiled by fans at the start of the game, there was sense of occasion at the Theatre of Dreams.

Arsenal, with Nuno Tavares at left-back, spoiled the vibe by taking the lead in the most bizarre circumstances. United goalkeeper David De Gea collapsed to the floor after teammate Fred stood on his toe, after which Gunners midfielder Emile Smith-Rowe opted to slot the ball into the net from the edge of the area. Referee Martin Atkinson initially disallowed the goal, but VAR instructed that the visitors be awarded the lead.

The equaliser could not have come at a better time, with Fernandes cancelling out the strange opener with his first goal since Ronaldo’s debut against Newcastle in September. Jadon Sancho found Fred and the Brazilian laid the ball off to Fernandes to calmly convert on his right foot from close range.

Ronaldo took over in the second half. First the Portugal captain swept home Marcus Rashford’s cutback to give United the lead on 52 minutes, before later restoring that lead from the penalty spot following a foul on Fred by Martin Ødegaard, who had briefly drawn the visitors level at 2-2.

A bonus for Portuguese viewers came in Diogo Dalot’s first Premier League start of the season at right-back. Dalot, so often overlooked by Solskjaer, stepped in for the injured Aaron Wan-Bissaka and gave an assured performance.

Ralf Rangnick spoke to the media for the first time as United interim manager on Friday morning, telling journalists: “Having seen Cristiano in the second-half, at the age of 36, amazing, top professional. At his age, I've never seen a player who is that physically fit. He’s still a player who can easily make the difference.”

United continue a busy fixture list this month with the visit of Crystal Palace to Old Trafford on Sunday.

While probably being the two most in form goalscorers available to Portugal, Cristiano Ronaldo and Diogo Jota do not form a good strike partnership for the national team. Neither are exemplary passers of the ball which has led to Portugal losing...

While probably being the two most in form goalscorers available to Portugal, Cristiano Ronaldo and Diogo Jota do not form a good strike partnership for the national team. Neither are exemplary passers of the ball which has led to Portugal losing possession on numerous occasions. We don't really have a player capable of mimicking Jota's tireless work rate with an exquisite ability to cross/pass the ball except... you guessed it, Bernardo Silva. And that's what CR needs to not be shadowed out from the playing field. Bernardo should be our false 9.

Read More
SupremoGino
There are no comments posted here yet