“When I left Portugal, it was for this” – Renato Paiva celebrates Independiente del Valle’s first-ever Ecuadorian title 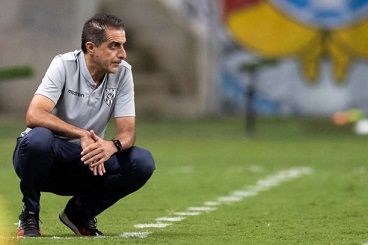 Portuguese coach Renato Paiva made history on Sunday night when he guided Independiente del Valle to the first Ecuadorian league title in their history.

Independiente held traditional powerhouses Emelec to a 1-1 draw in Guayaquil in the second leg of the championship playoff, meaning their 3-1 home victory in the opening meeting last weekend proved decisive.

Speaking to media after the match, which saw the winners of the opening stage of the campaign [Emelec] meet the second-stage victors [Independiente] in a grand finale, Paiva reflected on his decision to leave Benfica’s B team for the new challenge in Ecuador almost a year ago.

“When I left Portugal, I was coming for this,” he said. “I knew I was coming to a club that could fight for titles. I knew about the power and quality of Emelec, Barcelona and Liga de Quito in this country. This is a club that is growing. It was a decision to come here and win, despite the difficulties.

“I have always said since I arrived: this is not a dream – it’s a goal. We have achieved it against a great team. I am proud to work with this group, which has grown and gone from less to more. I have grown a lot with them. They are great professionals and I’m very proud to have made history with this club.”

There is little doubt Paiva has developed Independiente into the most consistent side in the country, with just three defeats suffered in their last 30 league matches in a championship traditionally dominated by four major powers: Barcelona, Emelec, El Nacional and Liga de Quito. The quartet have won 54 of the 64 Serie A titles contested, making Independiente’s accomplishment a potential shaking up of the hierarchy.

In a nice touch, Paiva donned a t-shirt bearing the image of Jaime Graça during his celebrations. Former Benfica midfielder Graça worked as a scout, youth coach and academy technical coordinator later in life before passing away in 2012 at 70 years of age, and his influence on Paiva coming through the ranks at Estadio da Luz is clear.

“This man is a former Benfica and Portuguese national team player,” Paiva informed journalists. “He was the one who launched me as a coach. He is my soccer father. I know he is somewhere very proud of the work that I am doing. He was not wrong, because he was never wrong. Jaime Graça is his name. I always say it is because of him and for him that I work.”