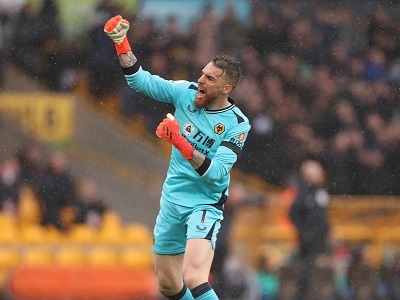 One outstanding Portuguese goalkeeper replaces another

The task of replacing the much respected and highly experienced Rui Patrício between the sticks at Molineux could have easily been a daunting and complicated challenge. Yet the seamless transition from one Portuguese shot-stopper to another has gone sensationally smoothly and has been imperative to Wolves making a very good start to their inaugural campaign under the stewardship of Bruno Lage.

In what will become a series of articles on “The Wolves project”, Portuguese football and Wolverhampton Wanderers expert Alex Gonçalves reports on the positive impact made by goalkeeper José Sá since his move to England last summer.

José Sá has been such a hit that many English pundits and fans alike, irrespective of club allegiances, are openly suggesting he has been the Premier League signing of the season, having arrived from Olympiakos for the relative bargain fee of just 8 million euros last summer. Patricio was much loved by the vast majority of Wolves supporters, but Sá’s well-rounded modern-day goalkeeping ability has led many to believe that he is, in fact, an upgrade on his predecessor, with his ball distribution and command of his area, alongside his shot-stopping ability, making him not only a reliable last line of defence, but also an asset in springing attacking moves and in his team’s general build-up play from the back. He has even registered an assist this season after his drop-kick against Southampton fell into the path of Raúl Jiménez who weaved through the defence to score.

That match with Southampton early on in his Wolves career was arguably the perfect summary of Sá as a goalkeeper, encapsulating both the very best and the very worst he has to offer. In addition to that assist, he also pulled off a great double save to deny Southampton, and another couple of smart stops throughout the game. But there was also a moment when he lingered on the ball for too long and was dispossessed, thankfully rectifying his error in time to preserve his clean sheet. Wolves went on to win 1-0, in large part thanks to him, but his lapses in concentration can also cause his side problems, which can, and in the future perhaps will, be punished. The verdict so far, however, is that this shortfall in his game is entirely forgivable given that Sá has otherwise been so reliable and saving his team points on such a regular basis. In practically every metric, he is performing as one of the very best goalkeepers in the league. You could make a case that he is, currently, the very best in the division.

There have been plenty of stand-out moments in a Wolves shirt for Sá already; a couple of double saves against Tottenham was a nice introduction to life in England, as was that previously mentioned double stop against Southampton, while his close range save to deny Saint Maximin – and his one on one save against rivals Aston Villa – were also excellent, and crucial in Wolves picking up six points in those two games. His save to deny Bruno Fernandes deep into stoppage time to earn Wolves a momentous victory at Old Trafford today is only the latest in a long line of great moments for him.

Without context, therefore, one would be forgiven for being incredulous at the suggestion that there is such a gulf in international experience between Patrício and his successor, such is the calibre of both goalkeepers. While Patricio has been almost ever-present for Portugal for over a decade, becoming Portugal’s most capped goalkeeper by a considerable distance with more than 100 appearances for his country, Sá, despite now being 28 years of age, is yet to make his debut for the senior national team. That surely cannot last for much longer.

And despite his lack of opportunities for Portugal, his success at Wolves is far from surprising. Those who have followed his career will know that his exploits at Wolves simply serve as testament to the catalogue of impressive traits Sá has at his disposal, and although he was somewhat devoid of game time at FC Porto – having had to serve as deputy to the legendary Iker Casillas – his stunning displays at youth level for his country indicated he was a very special talent. The only real surprise was that Porto allowed him to join Olympiakos on a permanent deal for such a low fee in 2019. Granted, he hadn’t made the most of the few chances he was given under Sérgio Conceição at Porto, and was guilty of one or two high-profile mistakes while with the Portuguese side, but any goalkeeper would struggle to perform at their highest level when game time is sporadic.

At Olympiakos, he played consistently and thrived, and became something of a fan favourite with his impressive performances. After just half a season, he’s already starting to become one at Wolves too, who have been almost entirely dependent on their exceptional defensive statistics to be as high as eighth in the table as it stands. Wolves have quietly been having a successful season under Lage, and Sá has been integral to that.

Glad to see Jose Sa getting his shine. Felt he was the superior talent when Porto brought in Casillas. Sure, Iker was good for publicity and name recognition, but it ultimately cost us a big prospect in Sa. And long term, keeping Sa would have...

Glad to see Jose Sa getting his shine. Felt he was the superior talent when Porto brought in Casillas. Sure, Iker was good for publicity and name recognition, but it ultimately cost us a big prospect in Sa. And long term, keeping Sa would have served us better.

Hopefully, Porto learned their lesson and avoid the same mistake with Diogo Costa.

Glad to see Sa and Wolves doing well. Also happy to see Bruno Lage making a name for himself. Always found it hilarious that LFV and his obsession with Jesus allowed him to give that clown unlimited resources for crappy returns, yet a guy like Lage couldn't get €10 and a pack of cigarettes.

Better than Rui Patricio imho. Rui is shaky since his injury and a disasters in distribution.
BTW interesting quote from Rangnick after the defeat against Wolves. Food for thought for Mr, Santos:
„They’re playing with four or five central...

Better than Rui Patricio imho. Rui is shaky since his injury and a disasters in distribution.
BTW interesting quote from Rangnick after the defeat against Wolves. Food for thought for Mr, Santos:
„They’re playing with four or five central midfielders and we had problems to control that part of the pitch.
"We decided to change our formation and we had more control – they didn’t have as many chances – but we missed our chances and we have to admit they deserved to win.
"We didn’t press at all. We tried but we were not able to get into those pressing situations. They had an overload in midfield and they played via their wing-backs." No further comments

Liam
This comment was minimized by the moderator on the site

Brilliant article, looking forward to the rest of this series . Good work Alex

Reminho
This comment was minimized by the moderator on the site

Agree RP’s distribution has really been bad for the seleção esp against Germany in the Euros we were under so much high line pressure and his kicks put us in trouble.

Its obvious Jose Sa is the future and imo the now. He has been brilliant since his move to Wolves, rock solid on both instinct shot stops and commanding his area. His distribution is beyond Rui P.

He should be #1 with Rui as the backup but again...

Its obvious Jose Sa is the future and imo the now. He has been brilliant since his move to Wolves, rock solid on both instinct shot stops and commanding his area. His distribution is beyond Rui P.

He should be #1 with Rui as the backup but again this is Santos and this wont happen.

Also AGAIN "a maca podre" shines through, there simply is no one else to replace Joao Moutinho and until Portugal address this the mid is a huge problem. Bruno F is a bench player who hits the crossbar on a tap in, enough said about him...