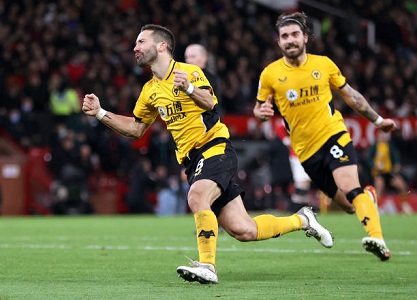 João Moutinho scored the winning goal as Wolverhampton Wanderers won against Manchester United at Old Trafford for the first time in 42 years on Monday evening.

Bruno Lage’s side, which included six Portuguese, were deserving winners at the Theatre of Dreams, consigning Cristiano Ronaldo’s United to damaging defeat in their quest for a Champions League place.

Wolves came into the game having not played in two weeks, since holding European champions Chelsea to a 0-0 draw at Molineux. Having impressed at times this season despite a goal-shy record, Wolves controlled the early stages with a proactive approach which saw United struggle to get out of their defensive third.

United’s interim boss Ralf Rangnick has asked his side to play a more aggressive, high-intensity style, but despite both teams being set up to attack the game rarely demonstrated the quality many had hoped given the players on display. United improved after half time, especially after the introduction of Bruno Fernandes in place of Mason Greenwood, whose withdrawal was jeered by the home crowd.

The hosts appeared the more likely to find a winner in the second half, but after Fernandes hit the bar with their best opportunity and Ronaldo had a goal ruled out for offside, Wolves grew stronger in the final stages. Their courage in hunting a winner was rewarded eight minutes from time when Adama Traore’s cross was headed straight to Moutinho, who found the bottom corner with expert precision from the edge of the box.

“It’s one more victory,” Lage said after the match. “It’s a lovely stadium, a place with a lot of history, but the most important thing is the way we played this game against this team. One more time, we prepared very well for the game, I gave a lot of confidence to my players to come to play in our way.

“First-half I think it was very good, we controlled everything and created a lot of chances, but we didn’t score. Second-half they adapted, changed their system, and also us. After, we changed some guys and the guys who came inside helped us to win this game. Even now, three points, one goal, we had more chances than goals, so we need to continue to work, every time it’s like that.

“When we had the ball, we were confident with the ball. We deserve this victory for Wolves, for the fans, and for the players because they are working hard to play this way.”

Goalscorer Moutinho added: “We did a great job today. We deserved this win, we played very good, particularly in the first half. But after that we took control all game, we only let Manchester create one opportunity, but we created a lot. Then I scored and the team won, which is the most important thing for me to help the team.

“I felt very good to help the team to score. I scored and I feel very good because I try to score for my baby, for my children, for my wife because they support me a lot all the time. I’m very happy for me, for the team and for my family.”

The result means Wolves, in 8th place, are now just three points behind 7th place United, who opted not to restore Bruno Fernandes to their line-up after his suspension and left Diogo Dalot on the bench. Ronaldo endured a frustrating evening, again starved of service in a frontline which rarely looked in sync.

Next weekend sees the return of the FA Cup, with Wolves hosting Championship side Sheffield United, while United are drawn at home against Aston Villa.