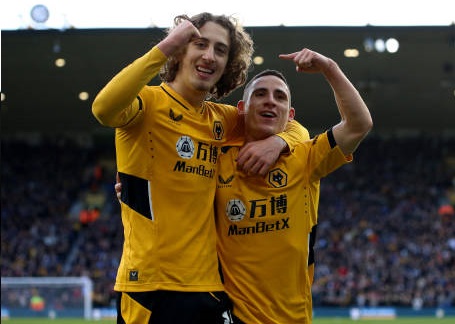 Wolverhampton Wanderers followed up their triumph over Manchester United last week with a 3-0 win over Sheffield United this weekend to progress in the FA Cup. Daniel Podence was the star of the show for Bruno Lage’s side with two goals, and Nélson Semedo also scored for the first time this season.

Elsewhere, André Silva continues to show signs he is recapturing last season’s form in Germany with a brace for RB Leipzig against Mainz. There was also another goal for Beto in Serie A and Gonçalo Guedes in La Liga, while in the FA Cup André Gomes ended a long wait for an Everton goal and Bernardo Silva is on course for his best-ever goalscoring season after scoring for Man City.

Wolves boss Bruno Lage saluted the performances of both Daniel Podence and Fábio Silva after their 3-0 win over Sheffield United. Podence scored twice – the first assisted by Fábio Silva – and right wing-back Nélson Semedo scored after receiving a pass from left wing-back Rayan Ait Nouri to cap a successful day for the Portuguese contingent.

4️⃣ goals in 3️⃣ cup games this season for @daniel_podence!

“I said to the players, I’m not giving opportunities to anyone because they are the main players. Maybe Fábio didn’t play too much until now, but the way he’s working and training and the way he showed me in the games, that’s the real Fabio I want to see in every moment. Maybe now he’ll have more time from me.

“Every time we need to understand the opponent, if they come with a high press, we need to understand where is the space, the first goal with the good link with Max and Semedo, and Rúben  Neves and Fábio attacked the space, so that’s the good things we work on in training and we are happy when it happens in the games and we score a goal with that.

“Also, the second goal, it means a lot to us for the guys to understand. We work a lot at starting the ball in the half-pitch, we go back, we start with John, we find the spaces, Rayan cross to Semedo.

The FA Cup 3rd round involves 64 teams from throughout the English pyramid competing for a place in the next round. As well as Podence and Semedo, there were also goals for fellow Portuguese internationals André Gomes and Bernardo Silva as Everton and Manchester City secured their places in the next round.

Wolves are again proving a profitable outlet for Portuguese players and managers to further their careers. To profit from gaming whether in Portugal or elsewhere, play joker123 online, a game is available on the most reputable gaming websites.

We need to talk about this Cole Palmer assist 😎

Everton’s highly-entertaining 3-2 extra-time win at Championship side Hully City saw a long-awaited goal for ex-Benfica midfielder André Gomes. The Toffees went behind inside the first minute, but by the half-hour mark Gomes put his side 2-1 up with a diving header, scoring for the first time in almost three years since a defeat to Wolves in February 2019.

Everton have turned things around against #HCAFC - goals from Demarai Gray and Andre Gomes have given Rafa Benitez's side the lead. #EFC

A very open match so far... 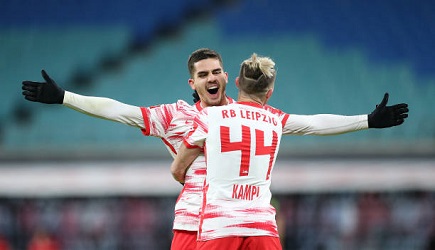 André Silva looks to have found consistency at new club RB Leipzig after scoring two more goals in their 4-1 victory over Mainz on Saturday. Silva’s brace in the Bundesliga means he has now scored seven goals in his last eight games – a sign that he is recapturing the form which saw him break Frankfurt’s club record for most goals in a league season last term.

The first goal of the game after just twenty minutes essentially decided the outcome, with Silva’s goal-bound shot blocked by the hand of Mainz’s Alexander Hack, who was punished by conceding a penalty and being issued a straight red card. Silva stepped up to give his side the lead with his 10th consecutive success from the penalty spot.

Silva rounded off the scoring to make it 4-1 to the hosts just after the hour, dispatching his right-foot shot high into the net for his 10th goal in all competitions this season. Silva appears to have found consistency in the wake of previous coach Jesse Marsch’s departure, and the Portuguese spoke about new boss Domenico Tedesco after the match.

“We’re all happy, we worked really hard for that win,” said Silva. “I try to create chances in every phase of the game. Before the opening goal, I saw that there was an opportunity to win the ball. Unfortunately for Alexander Hack and fortunately for us, the shot hit his arm.

“I always work hard on myself. The fact that the coach and the team work so hard allows me to give my best. Every coach is different, and I’m very happy with our new coach: he brings a good energy to the team, and we are ready to follow him.”

Valencia were in the Spanish capital on Saturday night to meet La Liga leaders Real Madrid at the Santiago Bernabeu. Los Ches came into the match having seen a recent unbeaten run in the league ended by Espanyol last week, and with Gonçalo Guedes and Hélder Costa in the line-up, Valencia were comfortably beaten by the home side.

Real had taken a 3-0 lead by the hour mark to essentially end the contest, but Guedes pulled one back for Valencia as he continues what is likely to be his most productive season to date. Valencia were awarded a penalty for a tug on substitute Marcos Andre, and Guedes scored at the second attempt with his head after Thibaut Courtois had chosen well in diving to his left to save.

Gonçalo Guedes assists himself from the penalty spot pic.twitter.com/EdYvWK5EQl 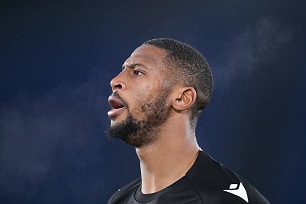 Former Portimonense striker Beto scored his 8th goal in Serie A this season in Udinese’s 6-2 home defeat to Atalanta. The 23-year-old finished well on his right foot late on at Dacia Arena, as the Bianconeri saw their solid recent home form ended in brutal fashion by the Bergamo side, who were 3-0 up at half time.

In the United Arab Emirates, Adrien Silva made his debut for Al Wahda in a 2-1 victory at Al Nasr. Silva played the full ninety minutes in midfield for the visitors, while there was a Portuguese goalscorer on each side as Fábio Martins’ early penalty gave Silva’s men the advantage and former Vitória de Guimarães man Tozé struck for Al Nasr. Finally, in the Netherlands’s Eerste Divisie, Rui Mendes scored his 6th goal of the season for Emmen in a 2-0 victory at Den Bosch.