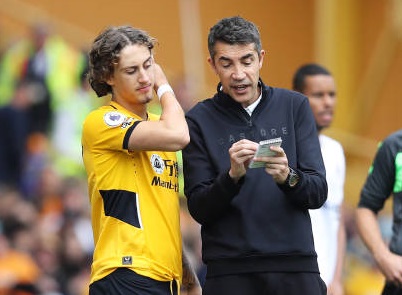 Wolverhampton Wanderers manager Bruno Lage has suggested Fábio Silva could be in line for more opportunities after staring in their 3-0 FA Cup victory over Sheffield United on Sunday.

Silva assisted the opening goal for Daniel Podence and impressed throughout as Wolves booked their place in the 4th round. Having struggled for game time this season, Silva has clearly pleased his coach with the display, as well as his efforts in training at Molineux.

“I said to the players, I’m not giving opportunities to anyone because they are the main players,” Lage said. “Maybe Fábio didn’t play too much until now, but the way he’s working and training and the way he showed me in the games, that’s the real Fábio I want to see in every moment. Maybe now he’ll have more time from me.

“The other guys, we used Marcal as a centre-back, Leander is a main player, Adama [Traore] is a main player also, so just that. I had opportunities to play these players and I’m very happy in the right moment to give a game to Fábio because he understands better the things I want from him.

“Fábio is a talented kid, but he needs to continue to work and the first man he needs to impress is me, every day during the training, to be more consistent, and the kid is doing that. I remember two or three months ago when we played against Tottenham, it wasn’t a good performance, but this is life.

“They are very young and sometimes they expect more things than they have in the moment, but they need to continue to work.

“To be fair to me, with our results, I don’t have the chance to put him on the pitch, but if he works like he’s been working the last couple of weeks, if he plays like he played in the last two games, then for sure he’ll have more time with us and he’ll score more goals for us.”

Not sure what to make of Fabio. I think he moved into the Premier League way too early. With the injury to Jimenez, he was thrown into the mix. When I watch him play, I don't see the talent. He looks like a lanky uncoordinated player who...

Not sure what to make of Fabio. I think he moved into the Premier League way too early. With the injury to Jimenez, he was thrown into the mix. When I watch him play, I don't see the talent. He looks like a lanky uncoordinated player who is lost out there. Still don't see how he made the leap to the Wolves. But hopefully Bruno can turn him into something. Best of luck to him.

Trying to think of another player who he reminds me of and I cant.

Trying to think of another player who he reminds me of and I cant.

For comparison, Andre Silva at the age of 19/20 was starting for Porto and bagging goals in Europa, Liga NOS and champions league, we saw it. When Rafael Leao scored a solo goal vs Benfica in the league we all saw it (the potential). I dont see it with Fabio and I hope im wrong.

Yes I agree as well, NES starting Fabio when Jimenez was gone and no Jota was an awful decision.